The Orchard's Chris Manning on the No.1 BTS album campaign 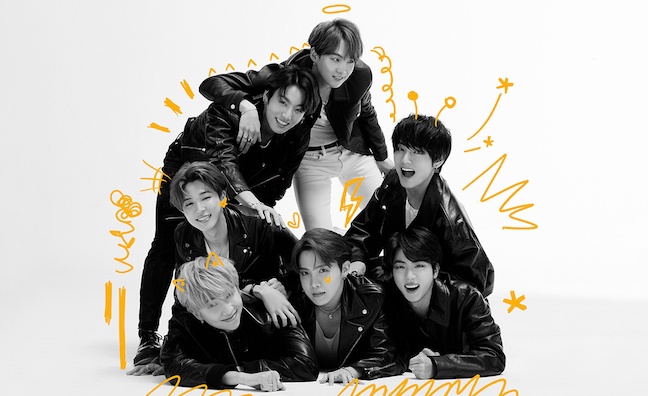 The Orchard’s Chris Manning has spoken about the “unparalleled enthusiasm” for BTS following the band’s big No.1 with Map Of The Soul: 7 (BigHit Entertainment).

The South Korean group landed at the summit with first week sales of 37,978, according to the Official Charts Company. BTS opened with a bigger tally than Eminem to score the fastest-selling album of the year to date in the UK. Map Of The Soul: 7 is also the biggest week's sale of 2020 in the US, where it opened with 422,000 equivalent album units.

It’s the second UK No.1 for BTS, who reached the album summit with last year’s EP, Map Of The Soul: Persona (89,648 sales to date). It was the first K-Pop chart-topper.

“The momentum with the band continues to rapidly build, so any new release is met with an unparalleled amount of enthusiasm,” said Manning, GM, UK & Europe at The Orchard. “The fanbase are totally engaged by way of social media and create an enormous amount of buzz when the band announces any new material. Key moments in the lead-up to the launch date such as trailer videos, concept band photos being released and artwork reveals help drive enormous awareness with the release day being an almost celebratory event. Bringing retail on board with the scheduled drops of assets from the label dovetails perfectly in creating strong pre-orders right up until day of release.”

The Orchard partnered with Proper Music on the physical release of Map Of The Soul: 7, which released in multiple versions. BTS has delivered strong results with high-value deluxe editions – 77.5% of the week one sales for the new LP were physical.

“The physical aspect of any BTS album really matters to the fans,” said Manning. “Collectable, multi-version formats containing postcards, posters, stickers etc, all housed in lavishly presented packaging add to the very unique way that BTS are able generate impressive sales. To add to the event aspect of the release the albums are launched physically and digitally at the same time, globally.”

The band also perform well on streaming, with 18,419,073 monthly listeners on Spotify. The new single On charted at No.21 on Friday (February 28) with sales of 22,256. It debuted on TikTok, which reportedly resulted in a brief crash for the app when fans rushed to the platform to hear the track.

“We have seen streaming services across the board support the release campaign, not only in the UK, but globally,” said Manning. “Our sales and marketing teams are working in coordination internationally and managing locally.”

An alternate version of On features Australian singer Sia.

“BTS already has a global audience, and features like Sia can only strengthen that reach,” said Manning.

The incredible rise of BTS beyond their home country has seen British media gradually come on board, despite the group singing largely in Korean.

“We have seen support across radio and TV platforms in the UK as well as many other regions,” Manning told Music Week.

There are limited opportunities for BTS to do promotion and media in the UK. But their huge social media presence means they can reach the fanbase around the world.

“With an artist like BTS, they engage with their fans in many ways regardless of the location,” said Mannning

The campaign will now continue into the summer with two huge BTS shows at Twickenham Stadium (July 3-4). It follows Live Nation arena and stadium dates in 2018 and 2019.

“We will continue to market around these events and re-engage audiences,” said Manning.