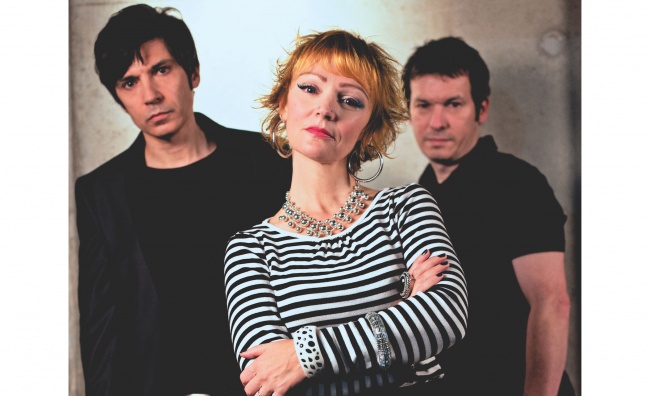 Paul Court from ‘80s indie pop act The Primitives has been talking to Music Week about the reformed band’s new box set.

Songwriter and guitarist Court talks us through the making of the band’s iconic 1988 hit, Crash, in this week’s Hitmakers, available in the current edition of Music Week magazine, out now. The song, originally a No.5 smash at a time when few alternative bands charted, is still regularly played on BBC Radio 2 and 6 Music and is a perennial sync earner, making numerous appearances in films and TV shows.

But the release of a new box set, Bloom! The Full Story 1985-1992, out now on Cherry Red Records, shows there was much more to the band than that hit. It compiles the three studio albums from Phase 1 of the band, alongside demos, live tracks and rarities.

The band – completed by singer Tracy Tracy and drummer Tig Williams – got back together in 2009, following the death of original bass player Steve Dullaghan, and have made new records (most recently 2017's New Thrills EP) as well as touring regularly. The band’s scheduled dates have been pushed back until January 2021 due to the coronavirus pandemic but, in the meantime, Court got on the line to talk the box set, the reunion and the enduring appeal of Crash…

How has the coronavirus pandemic affected you as a band?
“Everything’s been cancelled, so far as we know, for the year. You can send out a few T-shirts but that’s about it. Our tour is going to be in January now. There are a few things in August that are possibly still happening, but I’m not holding out any hopes really. Venues are going to have to close up, because they can’t run anymore.”

Some of your dates will be acoustic shows, what made you want to do that?
“We’ve never actually done an acoustic gig. It’s nice because you go back to the songs and start unwrapping them again and realising what you can do with them. It puts a bit of new life in there. We’re not just going to do what we do live, but quieter. Well, some of it is that but we’re doing different arrangements and things like that.”

Where did the idea to do a box set come from?
“Cherry Red have reissued two of our albums recently. But we thought, ‘Let’s put it all together so you’ve got the radio sessions and live stuff’. And it includes [1989 second album] Pure, which hasn’t been reissued ever, and there were some extra tracks around that album. Cherry Red contacted Sony to see what was in the vaults. There was some stuff I told them about, because I had vague recollections of tracks we did that I’ve not heard since but were probably there somewhere on tape. They managed to find some of that stuff. Then there’s the sleevenotes and we supplied a few old photos and things as well.”

Was it nice to rummage through the archive?
“It was… OK! You have a different way of looking at it now. Years later, you tend to just take it for what it is and not get too het up about the mistakes you made and how you could have done things better. It is what it is. We know about the mistakes, but if other people don’t notice them that’s good!”

You’ve been back together for 11 years now…
“Yeah, that’s actually longer than we were around the first time, that was only about seven years. It’s been good. It’s part-time but it’s good to be able to bring it back alive again. It’s been nice to discover there are more people interested than we thought; you can connect with people more and see what people are thinking around the world these days with social media. When we said, ‘Let’s do something’ in 2009, I really thought there’d be about 50 people interested. We thought we’d just play in a club in Coventry to our friends. Then somehow we ended up going on tour the next year, we went to America and then we started recording again – and that made the next thing happen, so it just kept rolling.”

Did you expect Crash to be such an enduring song when you wrote it?
“Not really. We actually dropped it from the live set at the end of ’86 because we had an abundance of that type of song. But then our producer Paul Sampson suggested we have another look at it. When the new version was mixed I remember thinking, ‘We’ve made a record here that sounds more like The Bangles or The Go-Go’s than the indie stuff we had been doing’. But we thought, ‘Why not? Let’s see what happens – we’ve got nothing else ahead of us’. We had some smaller hits as well, they’re kind of forgotten about as far as the man in the street is concerned, but we have got that one song that everyone knows. It’s nice to have one of those under your belt.”

* To read our Hitmakers on Crash, see the current edition of Music Week, available now, or click here. To make sure you can access Music Week wherever you are, subscribe to our digital issue by clicking here.