The Snuts plot a brighter future for UK guitar music 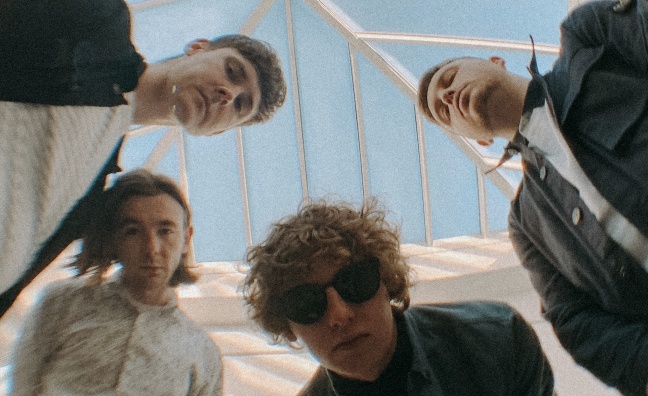 This week represents the culmination of the most intense period in The Snuts’ story so far.

The West Lothian band were among the many emerging acts who could have fallen through the cracks as a result of the pandemic, with their debut album delayed and a huge run of gigs called off. But, as singer Jack Cochrane told Music Week in our On The Radar interview last year, they’re not the kind of band to give up. The Snuts believe that they can make a major impact on the future of UK guitar music.

And so, this week, they’re sitting pretty at the top of the midweek charts with more than 12,000 sales for their debut album WL. Throughout lockdown, The Snuts made sure to connect with their fanbase through various livestream events, and the group were among the first acts to play live when lockdown eased last year at the Virgin Money series in Newcastle.

Cochrane also told us explicitly about the toll the pandemic is taking not just on the band, but on all their road crew, too. He hoped that their debut album, when it finally surfaced, would come as a tonic for all involved with the band.

Here, following our chat earlier this week with label Parlophone, we catch up with Jack Cochrane to find out more about what WL means to him, and how he hope it comes as a new dawn for guitar music.

Last time we spoke, you talked about expanding your sound to go beyond what's expected of a guitar band. What do you want W.L. to show people about The Snuts?
“We created W.L. with the intention of trying to remove the brackets that a lot of UK indie acts find themselves constrained within. It should feel universal and inclusive - both in sound and emotion. It represents the journey of a guitar band. I would really love for people to dive into it and immerse themselves in the themes that are embedded throughout this record. Social inequalities, the effects of drug culture in the youth, and battles with personal mental health just to name a few. There are moments of chaos and celebration on the record, but there is also a deeper layer to the tracks that tell people exactly who we are. To me, it shows people that we are confident in moving with the times and have faith in the future of music for UK bands.”

What are your favourite moments on the record and why?
“For me, opening with acoustic track Top Deck is one of my favorite moments on the record. Allowing myself to be exposed and vulnerable always terrified me, and I feel like it's something I've tried so hard to make my peace with. Also, Boardwalk is filled with a really lovely mix of honest and gripping songwriting and some genius production from Inflo. There isn't a thing about that track I would change and it makes me feel the way that my favourite artists do. I also love revisiting some of the songs adored by our fans in a live setting, for example Glasgow and Sing For Your Supper. I think you can feel the energy of a passionate crowd when listening to those ones.”

I hope that people can hear the risks we’ve taken

The record is coming out - after a slight delay - and we're still in the grip of the pandemic. How does this context affect releasing your debut album?
“Thankfully, we've never felt the need to shy away from releasing music during the pandemic. If anything, it keeps our spirits high and ambitions strong. We’ve inherited a new sense of responsibility as artists during this absolutely unprecedented time. Now more than ever, during my lifetime, it feels like music has had an ever increasing and incredible power to bring people together emotionally. However, the expectation of output for artists is still the same, but creatively more demanding. It's hard to speak for musicians as a whole, but I know we have to dig deep to keep the engine running.”

What have you got planned for the album release? How will you celebrate it with your fans?

“Making an album was our number one priority for us growing up as band. It's as if everything we have ever done as a band, and the risks we have taken, have allowed us to create an important and diverse record for our fans. The global pandemic seems to put a fork in the road of any ideas we have to connect with fans outside of the digital and online world. In light of this, we have quite literally lit up one of the most iconic buildings in Glasgow's George Square with lyrics from our song Glasgow. We are encouraging fans to visit this spot, safely, and breathe in the moment with us.”

The Snuts have lots of shows booked, can you explain how much you're looking forward to touring this album and getting in front of people again?

“We absolutely cannot wait to be back in front of crowds. It's that part of this game that soothes any of the heartache. It is often the case that the unplanned situations you find yourselves in as a band – like doing livestreams, for example – have actually benefited us as performers, massively. Removing our beloved fans from a live scenario has really forced us to be clinical and deliberate in the way that we deliver our sound. We have a dream tour booked of sell out shows up and down the UK, and we are particularly looking forward to three sold out nights at Glasgow's iconic Barrlowlands. This for us will be a celebration of the connection between us and our fans.”

Finally, what are your aims for the record? What would represent success for you?

“For me personally, I would be over the moon if this record could represent a new pathway for UK guitar music. I hope it inspires young musicians to invoke their right to express themselves freely with music – without being burdened by trends and genres. Guitar music is so important culturally, and is essential that we help it find its relevance again in 2021. I hope that people can hear the risks we’ve taken and how often we’ve stepped out of our comfort zone to blend styles and genres in a way that makes sense as a collective piece of art. To me, it will be even more of a success if it's up there competing with giants.”