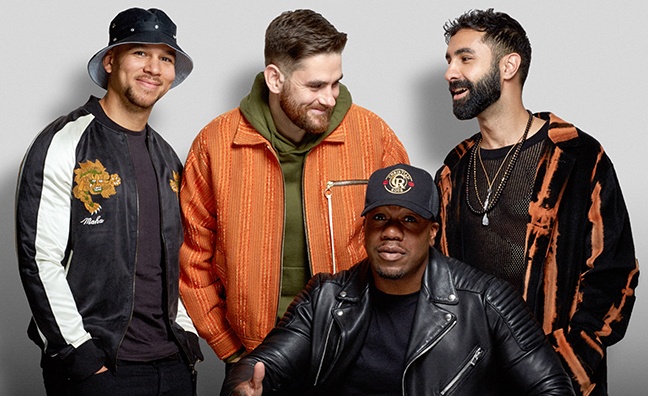 The album comes on the back of the success of their huge 2018 hit single These Days (featuring Jess Glynne, Macklemore and Dan Caplen), and contains a host of notable guest appearances. Just come of the names collaborating with the group this time around Anne-Marie, Rita Ora, Tom Walker, James Arthur, Raye, Ray Blk, Stefflon Don.

Both of the group’s previous albums hit the top spot in the UK charts. In 2013, the group scored a No.1 with Home (which is currently on sales of 638,631 copies to date according to Official Charts Company data). In 2015, We The Generation also reached the chart summit and has sold 127,270 copies to date.

In the wider world of UK music, what makes Rudimental unique in your opinion?
“Since Rudimental started in 2011, many people have tried to copy their sound and style, sometimes to great commercial effect, but there isn’t anybody who more credibly mashes up UK club music with pop/reggae/soul etc, and their live show remains unique in the world. Anyone who hasn’t experienced it really should – you could say it’s an inclusive, multicultural antidote to a lot of what’s going on in the world nowadays.”

There’s an incredible array of guest appearances on the album – what are the challenges involved in pulling a roster like that together and getting everything signed off?
“Features are an incredibly time consuming and challenging part of the job of any mainstream artist these days, especially so with a production outfit, so a lot of our time is spent speaking to those artists and their managers, but Rudimental have always been an A&R source and an engine for finding new talent as well.”

Their live show is an inclusive, multicultural antidote to a lot of what’s going on in the world nowadays

What does that array of guest talent mean for them in terms of the streaming world?
“The array of talent across the album means that the music can potentially spread further than if it was just one person singing every song,and also potentially brings in an international audience which Macklemore helped with last year, for example.”

On top of being an incredibly successful act, Rudimental have proven to be a brilliant talent incubator for upcoming acts – have they got the recognition they deserve for that?
“Possibly the wider public don’t always connect Rudimental with say Anne-Marie as clearly as they should do for example, even though it’s quite well documented in the press. She was signed and developed by us with Rudimental and this time around, they’re looking to sign more artists and use their platform to help develop them.”

How have you gone about getting the word out about the album to fans?
“We’re using their live show heavily to sell the album through regional events and in-stores as their live connection is so strong. In addition to standard marketing activity, we’ve also been rolling out music and content throughout the eight weeks running up to the album release, with TV appearances on Jools Holland’s NYE Hootenanny show and Top Of The Pops over Christmas too.”

Finally, what are the goals for this campaign?
“Staying relevant is the biggest challenge for any act on their third album and Rudimental remain motivated to create urgent and exciting new music going forward. With the role-relevance of albums changing all the time, for Rudimental, their albums are a chance to show off crucial new talent and the scale of their own musical breadth.”

You can see the full tracklist for Toast To Our Differences below:

14. Do You Remember (feat. Kevin Garrett)

Last year, Music Week spoke to Mackemore about how These Days came together. You can our interview here.