"This is what we needed to be doing": How Rage Against The Machine, Public Enemy and Cypress Hill became the Prophets Of Rage 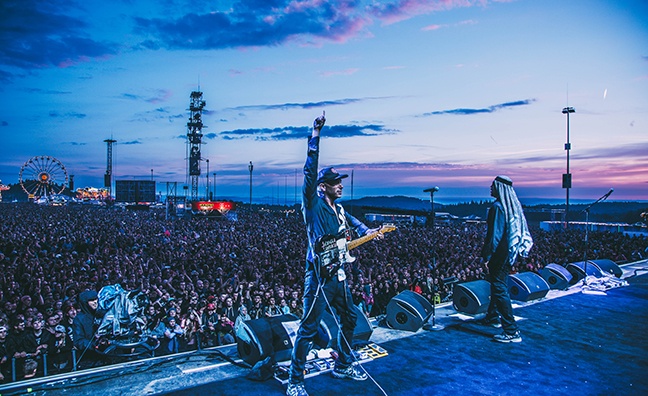 What happens when Rage Against The Machine’s guitarist Tom Morello, bassist Timmy Commerford and drummer Brad Wilk unite with Public Enemy’s Chuck D and DJ Lord, plus Cypress Hill’s B-Real? A supergroup primed to take 2017 by storm via their self-titled debut album which is released today (September 15) on Caroline International. They have already told us about how they formed in reaction to the 2016 U.S. elections in their recent Music Week feature, but here Chuck D, Morello, Timmy C and B-Real take us further inside the album that is ready to, in their own words, unfuck the world…

To start things off, how rewarding has this project been for you on a personal level?

TOM MORELLO: “This band was formed at a moment of emergency in U.S. politics. That is what made this happen: there was a news item that said, Donald Trump ‘rages against the machine - it made me so furious I tweeted about it. I said, That’s not what we had in mind. I realised that it wasn't enough to tweet about it. There’s a tremendous amount of power and torque in our collective catalogues and in our future, and we needed to be fully engaged in both rocking and changing the world.”

B-REAL: “It’s a huge responsibility because it’s a different platform than Cypress Hill. Getting with the likes of Tom, Tim and Chuck D, who had been one of my idols growing up - it was a big responsibility to step up to the plate and talk about the things going on in the world right now. It gave me a sense of a bigger responsibility as an artist, this gave me a chance to speak my mind along with my brothers here. When I got the call [to join the group], and as surprising as it was, I totally got what they were trying to do. I felt it was my responsibility to become a member of the band. There’s a whole lot of music out there, but none of it is speaking to what’s going on in the world - most of it is distraction and celebratory of material things as opposed to saying, Hey, check out the poverty, brutality and the injustice that’s going on. We felt this is what we needed to be doing.”

TIMMY C: “What gives me the biggest smile is I feel like we’re better players, like [single] Unfuck The World, the guitar solo is just ridiculous. It’s ridiculous that’s what it is. I feel like the type of music that we’re making, it’s not Rage Against the Machine, it’s a little different. Musically there’s a little more going on. It’s a new band, it’s exciting.”

CHUCK D: “For me it’s like going to the Olympics.”

What do you mean by that?

Chuck D: “Well, having a 30-year career? That’s a joy. I would only be involved in something that was greater than that. On paper it’s incredible, and that was part of the joy and pleasure of us trying to not just match it, but exceed it. If you’re going to get involved in anything you gotta make it not just work, you gotta make it win. That’s the philosophy of where all six of us come from. Don't just make it work, make it win.”

There’s a tremendous amount of power and torque in our collective catalogues. We needed to be fully engaged in changing the world

Tom and Tim, you were both inspired by Public Enemy and Cypress Hill in Rage Against The Machine, what’s that feeling like of being in a band with them now?

TIMMY C: “Well, I gotta tell you, it still is a pinch yourself moment, because those were the two hip-hop cornerstones of Rage Against The Machine. When we were making the first Rage record, the first Cypress album was enormously important. And, of course, Chuck D and Public Enemy are one of the greatest acts in the history of Western Music, and hugely to us as a band, and as people. But now I will say that we’ve transcended that and now we function as a band - not people who just merely admire each other’s past work, but as a band that works every day to be the best band on every stage we play.”

And Chuck, how has it been collaborating with B-Real on vocals?

CHUCK D: “The wonderful thing is that this project doesn't happen without B-Real. Myself and B-Real are used to running groups, but no one man could replace Zack [De La Rocha, Rage Against The Machine’s frontman]. B-Real knew that, and I sure enough knew that. When B-Real agreed to do this I knew that it was possible to take this on, as being the best second MC possible - it’s a role I relish. When B-Real accepted the invitation to join the group, I knew he could be number one, and I could be the best microphone number two there ever was.”

Aren’t you being unfair on yourself here?

CHUCK D: “No, no, no. It works because B-Real has an incredible presence, he has the tonality that is similar to some of the Rage efforts, although Prophets Of Rage is a new project, that’s the position from day one that I said would work for him and work for me.”

So we’ve established that it’s a hell of a union. What is it you can achieve together that you can’t in your individual groups?”

B-REAL: “I think the combination of the three of our bands, the history and what we’ve meant to our fans in the world of music, it’s just a bigger scenario in terms of people who are going to pay attention. The combo makes for a bigger platform and I think it’s more intriguing for people. It was intriguing to me.”

What do Prophets Of Rage mean to music in 2017?

CHUCK D: “I think very few groups get ordained to be kind of be the words of wisdom for a few generations at the same time. Every generation has their voice that they listen to, but there’s some groups that transcend that and talk to all generations at once. I think The Beatles did that. The Beatles came out and they were this young group that, when we look back, actually talked to people in six generations. I think this group does that but in different ways. I think the power, the force, the intensity, to pay attention to the world comes out with urgency in this music.”

Moving on to the album, how long did the record take to put together?

MORELLO: “We wrote a bulk of the material within two weeks. Then I think everyone went away for the holidays, came back and over the course of the next couple of weeks, there were maybe one or two more sessions between ourselves, [producer] Brendan O’Brien came in and then we had a month solid in the recording studio. Beginning to end, from the first snare hit to the last mix, was one month in the recording studios. So the whole process was probably over the course of three months, but that’s [including] writing the songs, rehearsing the songs.”

Is that fast for you guys?

MORELLO: “Well, in the past it’s taken five years for Rage Against The Machine to make a record, so yeah… that’s pretty fast!”

What inspired the sentiment behind the single Unfuck The World specifically?

MORELLO: “We were doing a photo shoot in the US and in the little dressing room there was a sticker that said unfuck the world, and Chuck D gravitated towards that then Timmy made a suggestion to hook it up with a particular piece of music.”

In terms of the current political climate that clearly informs this album, what currently scares you most about Trump’s America?

TIMMY C: “I mean, I’m trying to see the upside, and going, Okay, this guy is here, there’s more people like me, and I know a lot of people that are paying a lot more attention to the news media, being more political. I think that’s a good thing. I think it’s cool how people see how fucked up the system really is.”

MORELLO: “Trump is an opportunity. I think it’s an opportunity where you can either bury your head in the sand and cry about it, or it’s a call to arms. Trump is the wrong answer to the right question. That question is: Why do the institutions that rule us not serve our needs and the needs of the planet? Trump has the wrong answers. He blames it on immigrants and Muslims and science, but there has been an awakening, and because of the anxiety, the fear and the threat that the Trump/Pence regime has created in the world, that has created a resistance. Now it’s our responsibility to make that resistance into something that dethrones the Trump regime, and then creates a more decent and humane planet. And not allow us to be back in same old business as usual channels. There is a resistance and that resistance needs a soundtrack.”

On Hail To The Chief, it certainly sounds like you’re writing about Trump directly…

CHUCK D: “It really doesn't deal with Trump as much as it deals with Mike Pence. We feel that Trump won’t be there long and Mike Pence is going to come right in there with his militaristic point of view…”

So you’re already targeting things in the political background?

CHUCK D: “Well, we already made a song so it’s even more than targeting. We committed to it. Let me tell you this, you don’t wish for fucked up situations so you can be a group. Enough shit going on in the world to talk about.”

Another standout track on the record is Living On The 110 - what inspired it?

B-REAL: “In America, one thing that you’ll see happening a lot, at an alarming rate, is more and more homeless people camped out on the freeways of the United States. One in particular, in California, is the 110 which I see every day because my studio is downtown. I see tent after tent, after tent, after tent of these homeless folks and it’s pretty fucked up when you see that’s a family, you know what I mean? No one is doing shit for any of these people. There are not enough homeless shelters, there are not enough places where you can house these folks. On top of that, there’s not enough information out there for the programs that will house them. People that have kids and need shelter, you just don't see it because nobody is giving two fucks about anyone else. Compassion in this world is very low right now.”

You can watch the video for Living On The 100 below