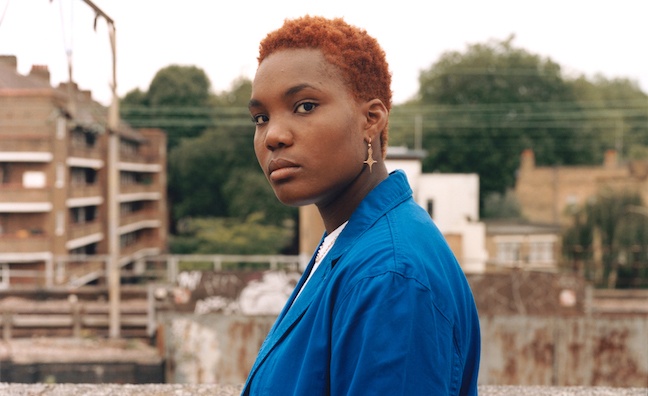 After an incredible 2020 for Arlo Parks, now the artist long tipped by tastemakers has released her debut album, Collapsed In Sunbeams (Transgressive).

As well as making a chart impact across Europe and securing playlist support from BBC Radio 1 and 6 Music, the singer-songwriter from South London has collaborated with Easy Life, Fraser T Smith and Glass Animals (on the single Tangerine). Last year, Arlo Parks made Music Week’s cover for our celebration of independent music.

The release of the album coincides with a new Amazon Music film, Tonight With Arlo Parks, directed by Transgressive co-founder Toby L and Louis Bhose.

Here, in the first part of his Music Week Q&A, Toby L opens up about the independent label’s big ambitions for the rising star…

What are your hopes for the album in week one and beyond? How much support is there in terms of radio, media etc?

“Since we first heard Arlo's music and spent time with Arlo and her management team (Ali Raymond and Sarah Rodriguez at Beatnik Creative), we knew that there were no barriers to her art and who it could reach. Her words and delivery immediately captivate anyone that comes into contact with them, and, as has been written about a lot recently, her spirit is one of prescient wisdom and empathy. It's exactly what we need in our current times.

“Therefore our hopes are boundless. Week one in the UK is of course a key consideration, but is literally just the beginning - we're thinking about the campaign holistically and globally, so we have built an intensely international plan that takes us all the way into 2022. Arlo is currently one of the most played artists on SiriusXM in the States – where there's also just been a huge New York Times feature – and appears on Jimmy Kimmel this week. We've already lined up other major TV slots in North America that we cannot announce yet, but those appearances will see us comfortably into the summer. Alongside this, we've secured Album of the Month in Tower Records, Japan; Arlo is on high rotation via Triple J in Australia; and is getting added to commercial radio stations in France, Germany and all across Europe, where the media demand is incredible. The other week, Arlo spent a day doing mainstream press titles and broadsheets for South America. So, yes, although week one is certainly a focus, the bigger prize for us is to assemble a genuinely global campaign that resonates on every level across multiple areas, laying the foundations for something that's meaningful and long term.

“At home the support has been extraordinary so far and has been the leading charge to all of the other developments we are seeing elsewhere. The current single Caroline is on the A-list at both BBC Radio 1 (where Arlo is a current Brit List artist) and BBC 6 Music, where she's also presenting a new Artist In Residence show. We've also confirmed some huge UK TV appearances – most of which will be announced and land after week one. The press coverage has been overwhelmingly positive throughout, with some impeccable writing and photography along the way. The reviews coming in are lining up as four and five stars across the board.

“As wonderful an introduction as it's proving to be, most crucial to Arlo and the whole team is building a long-term artist career that will be vital for many years to come. We're all in it for the long haul, it's the only way we operate as a group of individuals. Collapsed in Sunbeams is going to be a justly revered and cherished album.”

Arlo Parks was building strongly a year ago, how did the pandemic affect the debut album launch?

“As soon as we all realised the magnitude of the era that we're in, knowing that touring wouldn't be on the table for a while, we promptly refocused the plan around ensuring a steady stream of incredible songs and accompanying visual output to ensure that, even if there wasn't a physical presence, there would always be a highly charged emotional and creative one, at the very least. This sense of continuity throughout has no doubt helped things – we haven't slowed down at any stage.

“But, even in spite of the growth in awareness for Arlo's music that's occurred during the pandemic, Arlo has still had to face disappointment, like everyone has. We were all really excited about the prospect of her first trip to SXSW last year, not to mention a US tour with Hayley Williams. Losing these moments, alongside other worldwide touring opportunities, isn't easy for any young artist, especially one that's being granted so many wonderful and exciting opportunities. Like everyone, we really cannot wait for live to come back.

“The sensitivity and honesty of Arlo's music is why she's connecting to so many people right now, alongside her warm and open nature, which is immediately noticeable from any communication she partakes in. We're collectively ensuring that the introduction to her work is direct and uncompromising. There really is no need for artifice in times like these.”

Arlo Parks is an alternative artist who’s won over tastemakers but she also has crossover appeal. Who do you expect the audience to be for this album and is there a key single for the campaign this year?

“We're really enjoying the fact that Arlo's music is for everyone – her words resonate with people her age all the way upwards, but it's not at the expense of edge or brutal truth. Arlo isn't afraid to deliver cutting lyrics or approach difficult or darker themes, whilst equally is prone towards infectious refrains and melodies. She insightfully covers all realms of the human condition in her work, which is what great artists do, and means that it works on a multitude of levels.

“In terms of singles, the song we've just released this week is called Hope. Again, between the title and its choral refrain ‘You're not alone/Like you think you are’, its sentiment couldn't be more needed right now. Unwittingly, the whole record taps into the current public mood, but still establishes eternal subject matter that we're sure will heal and soothe for decades to come. Hope is a really beautiful and important song, and its first radio play was a Hottest Record on Annie Mac's Radio 1 show, a great moment for the album's release week.

“Following this, our next focus is going to be Too Good, produced by and co-written with Paul Epworth - that's an absolute banger. We're servicing it just as the season changes and it'll be the summer tune that you won't be able to dislodge from your brain, not that you'd want to. It's irresistible and showcases another side of her artistry entirely.

“D2C and vinyl have of course been a key focus - we have created numerous special formats ranging from limited edition flexidiscs, to coloured cassettes, bonus live EPs, and a couple of different limited vinyl formats, ensuring her hardcore fans have plenty of entry price-points and bonus material should they wish for it. Everything is selling faster than we can press it, whilst Arlo has also ensured that her RSI is at peak levels through the level of signing that she's committed to recently!

“Indie retail is crucial to all of us at Transgressive as well as our marketing/distribution partners at PIAS, so we have ensured plenty of digital ‘in-store’ equivalents, ranging from a virtual performance at Amoeba in the US, to a digital track-by-track conversation about the record for Rough Trade, plus a raft of other shop initiatives. Elsewhere, we produced an alternative artwork version of the CD for Amazon, utilising a wonderful photograph that we all felt deserved attention. There's also a limited edition Blood Records picture disc. There's been a lot of creative thought put into how the music is presented and exists physically – it's really important to all of us.”