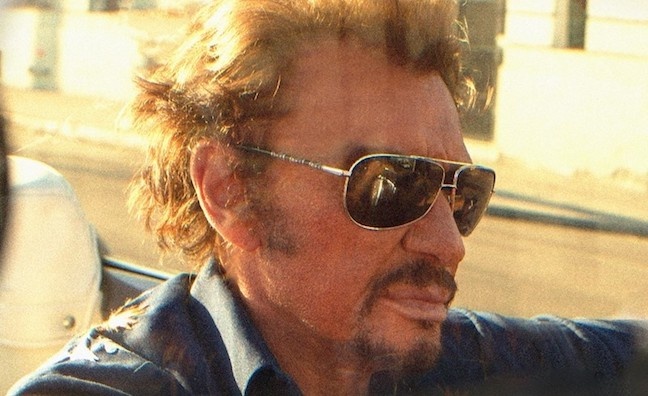 Tributes have been paid to France’s biggest rock star, Johnny Hallyday, who has died aged 74. He had been suffering from lung cancer.

"Johnny Hallyday has left us," said his wife Laeticia in a statement. "I write these words without believing them. But yet, it's true. My man is no longer with us. He left us tonight as he lived his whole life, with courage and dignity.”

The singer’s real name was Jean-Philippe Smet. Hallyday was first inspired by Elvis Presley – and he was nicknamed the French Presley by his admirers.

French President Emmanuel Macron said: "Across generations, he carved himself into the lives of French people. He charmed them through the generosity you saw in his concerts: so epic, so intimate, in huge venues, in small spots."

Thierry Chassagne, president, Warner Music France, paid tribute to Hallyday, who signed with the major in 2006.

He said: “Johnny Hallyday was an incredible recording artist and part of the Warner family for the last 12 years. He was one of the most prominent artists signed to Warner Music worldwide, selling more than 100 million records and delivering an amazing 18 platinum albums over the course of his career. He truly defined rock’n’roll in France and while we will miss him terribly his musical legacy will be there for generations to come.”

There were further tributes by artists on social media, including Lenny Kravitz and Celine Dion, who described him as a “giant of showbusiness”.

In a career lasting more than 50 years, Hallyday was known for relentless touring and he was a phenomenon in France, though made little impact outside the Francophone world. He failed to crack the US and has no UK chart appearances.

I'm very sad to hear the news that Johnny Hallyday passed away. He was a giant in show business...a true icon! My thoughts go out to his family, his loved ones, and to the millions of fans who adored him for many decades.He will be sadly missed, but never forgotten.- Céline xx…

Farewell Dear @JohnnySjh. Your friendship, sweetness and support are imprinted in my heart. It is an honor to have known you and to have spent time with you and your beautiful family. Your soul is pure Rock and Roll. Repose en paix. ????: @candyTman pic.twitter.com/1ZAFUewHlo