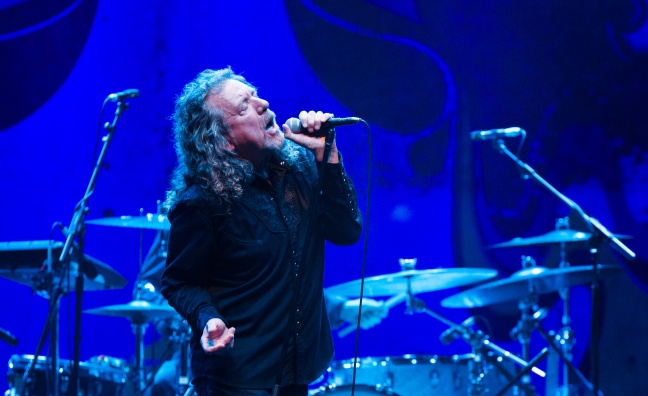 Nominations for the third annual UK Americana Awards have been unveiled ahead of the ceremony at Hackney Empire on February 1. Shortlisted artists include The War On Drugs, Courtney Marie Andrews and Imelda May.

It has also been announced that the Americana Music Association UK has chosen Robert Plant to receive the 2018 UK Americana Lifetime Achievement Award.

“The award is our highest honour and it couldn’t be going to a more deserving recipient,” said Stevie Freeman, CEO Americana Music Association UK. “Over the course of a legendary career, from his early love of blues and rock ’n’ roll, through the ’70s with rock pioneers Led Zeppelin, to a solo career that has never stood still, Robert Plant has introduced countless millions of music lovers to American roots music.

“In 2007 he released the iconic Raising Sand album with bluegrass star Alison Krauss, creating new fusions in the Americana world and garnering six Grammys along the way. His latest album, Carry Fire, continues to combine elements of American roots and blues with folk styles from the UK and beyond.”

The Bob Harris Emerging Artist Award will be given to up-and-coming London based four-piece The Wandering Hearts.

Newly-established for 2018 and selected by the AMA-UK board members, The Grass Roots Award celebrates unsung heroes of the UK Americana scene. It is presented to people working in the industry who have made outstanding efforts to support Americana music from the grass roots up. The first winners are Come Down & Meet The Folks, Alan Tyler & Big Steve.

The awards launch was held at Gibson Studio in London and co-presented by US singer-songwriters The Secret Sisters with broadcaster Baylen Leonard.

The awards show will be hosted by Bob Harris and will feature performances from nominees and award winners, including Robert Plant and The Wandering Hearts.

To celebrate the second anniversary of the Official Americana Albums Chart, the bestselling UK Americana album of 2017 will be recognised with a special award.