Victoria Monét on taking her solo career to the next level 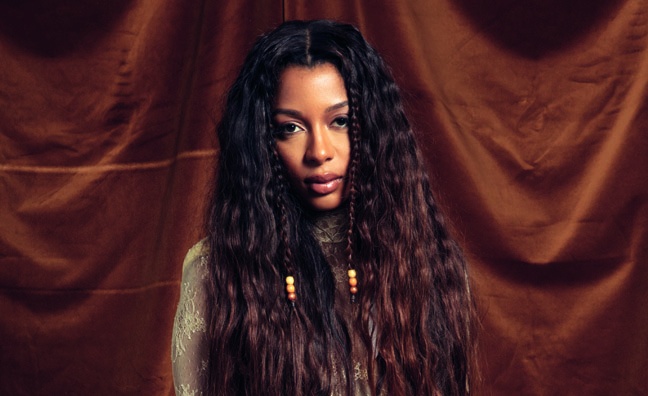 Recently in the pages of Music Week, we spoke to a host of artists, songwriters and producers about how they were adapting to life in lockdown. And one of them was Victoria Monét: who not only has songwriting credits on some of Ariana Grande’s biggest hits, but is also currently embarking on her very own solo career.

"This is a good time to take advantage of your own mind and see what ideas you can try now that no one’s looking!" Monét told Music Week about her lockdown experience so far. "You don't have to be afraid and ashamed to experiment with certain things. At home, I’m just recording myself so I may be more likely to try a certain melody. I can work pretty quickly because the mic and the computer are right next to each other so it feels like you’ve planted something that you can grow on your own. You’re the engineer, the recording artist, and the songwriter all in your own space."

Monét first sprung onto the scene with her debut EP Nightmares & Lullabies: Act 1 in 2014, and has since gone on to release a further three EPs with Live After Love as her last in 2018. Now, the singer-songwriter is back and gearing up to release her most slick and confident record yet as Jaguar is set to leap in Spring/Summer this year.

Your new EP Jaguar is coming out soon, and you’ve just released your new single Dive. Your new music is very empowering, especially for women...
"I love that! That was one thing that I really wanted someone to take away after listening, just that feeling of power and taking it back. One of the reasons I named it Jaguar is because of that huntress feel, and the way we have so much power within us. A lot of the times we’re behind the scenes and camouflaged in a lot of ways, but then we pounce and we go for something. It feels like the gist of a woman saying what she wants and doing what she wants and having that power."

How did you find the creation process?
"This is actually the first project that I took time off from songwriting to do, and it was about a good month straight of sessions. I just pulled in my favourite producers and people who I feel I really connected to musically and I also tried working with different people. One of the string players [Peter Lee Johnson] is a guy that played on all of my music before and we have new live musicians such as horn players and guitarists and new producer combos too including D'mile who is someone that I work with a lot. We tried putting him with other people that have a different sound and tried to merge things. But it was really a month of experimenting and just starting a bunch of ideas and finishing the ones we're passionate about and adding in live elements and just really having a good time!"

You have released solo music before, but was it different this time around? Did you want to go for a different sound or vibe?
"Yeah, I really feel like I put my heart into it this time! I wanted to be a forward-facing artist for a really long time, but it wasn't as lucrative. So I really had to focus on songwriting a lot more than I could my artist work. And that alone made me not as consistent working through on my own projects. I would just kind of treat my artistry as a side project, and like an escape for all the other work that I was doing. But this time I really took time out and I really wanted to focus on this and go deeper into what it is that I really love about music and what I'm drawn to and just experiment this time, so I think it's different in that sense. All of my projects have been really honest and from the heart, but this one feels a little bit more thought out. I paid more attention to it and the creative process of it as well."

Can you reveal anything else about Jaguar?
"I wish I could tell you a date. The pandemic has altered the ability to do a video for the song Jaguar. So we're figuring out a way to do it digitally and so that's the only hold-up up with the project release date specifically. But it's going to come out spring/summer for sure. And there's more music to follow that as well, which is already finished. So I'm just excited that I was able to kind of backload everything before this. But I really want people and women especially to feel how you felt, just empowered! One thing I've also heard people say is like refreshed and sonically in my own world. I want to people to just join me in the world and enjoy it."

It does seem your solo career is finally getting the recognition it deserves...
"Thank you. Yeah, people have said that. My Twitter is my most honest fanbase and so they're always tweeting me: 'You're underrated right now!' So now they're seeing a lot of love and they're like, 'People are finally waking up!' They show so much love and they're so passionate about me going forward. I'm lucky to have like a really nice supportive group there too. But yeah, things feel really good. Besides this whole coronavirus, 2020 was pretty cool [laughs]."

Subscribers can read our lockdown interview with Monét here.