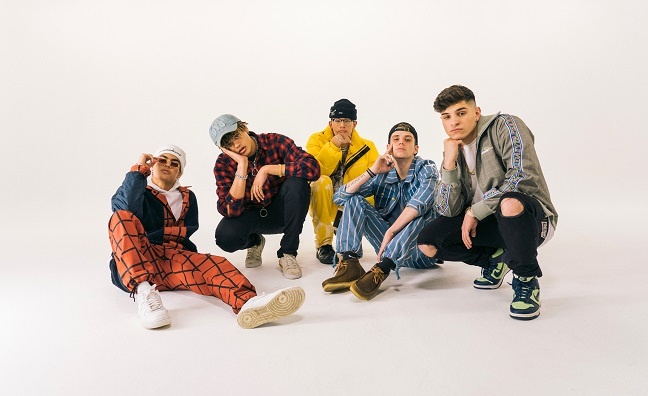 Syco-signed boyband Prettymuch have told Music Week they “will always take risks and be trendsetters” as their joint single with CNCO is racking up the streams.

Released in collaboration with Latin American group CNCO last week, Me Necesita has close to two million plays on Spotify and more than 3 million YouTube views. It was produced by Savan Kotecha (Ariana Grande, Katy Perry).

CNCO formed in 2015 on TV talent show La Banda, which was created by Simon Cowell and Ricky Martin. Prettymuch formed in 2016, put together by Cowell and former Syco president Sonny Takhar.

Speaking to Music Week earlier this year, Edwin Honoret said that Prettymuch aren’t concerned with being called a boyband.

“You can call us what you will, a boyband, a man group, you can literally call us anything, but as long as the music is good, it’ll always speak for itself,” he said. “We’re advocates for being creative, staying creative and giving people quality art regardless of genre. If it’s good music that’s all that should matter.”

Bandmate Nick Mara said Prettymuch – who are yet to release their debut album – are embracing the changing music industry.

“Things are changing, they’re not going as expected. Look at Lil Nas X, he’s making country rap, there are no boundaries,” he said. “Yes, at the end of the day we are a boyband, but we’re not going to limit ourselves to what a boy band is supposed to be, we’re going to step outside the box.”

The group is completed by Brandon Arreaga, Austin Porter and Zion Kuwonu. All five members were solo performers before being united by Syco. While they are yet to score a UK chart hit, they have more than 5 million monthly listeners on Spotify, where their biggest song is Summer On You (69,311,631 streams).

“We’ll always try to take risks and be the trendsetters, you always want to start something new,” said Honoret. “We’re making music we love and hoping other people love it too. Whether that means a hit record so be it, if it doesn’t at least we know people are listening who care about the craft we’re making.”

Read the full On The Radar interview here.