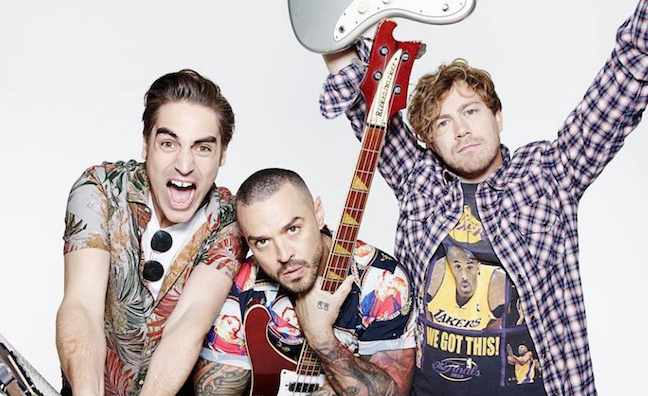 A week ago, Busted were involved in a race to the top of the albums chart that went down to the wire.

In the event, The Specials’ Encore pipped the returning trio’s Half Way There to No.1, and no one could begrudge the ska heroes that.

Busted, in conversation with Music Week two weeks before the release of their fourth album, were more concerned about The Greatest Showman’s ubiquity (or, as they put it at the time, “the fucking snowman”). But Half Way There’s performance showed that Busted’s fanbase is still very much active.

So too, did their three packed out, delirious 100 Club shows late last year, and the arena tour they’re about embark upon also suggests there are a plenty of people ready to spend money on seeing the band who rose to fame in the early noughties with hits including Year 3000 and What I Go To School For.

With that in mind, we quizzed singer and guitarist Charlie Simpson, bassist Matt Willis and guitarist James Bourne about the importance of their bond with the fans.

Scroll down for an exclusive Q&A, and check out the full conversation between Busted and Music Week in our new issue, out now.

How important were the fans when it came to Half Way There?
Charlie Simpson: “We had that thing of, ’What’s going on in the music industry right now?’ Well, no one’s listening to guitars, so we probably shouldn’t make a guitar album…’ We didn’t want to follow the trend of trying to get ourselves into the Spotify algorithm, what’s the point? I think our fanbase liked Night Driver, but this time it was, ‘Let’s give the fans what they would want to hear from us coming back, but done in our way.’”

Matt Willis: “We already have a [loyal] fanbase! In 2004, 750,000 people came to see us in the UK. Who the fuck are those people? We already have that, let’s try and grab those people, we don’t need to change ourselves when we already have something legitimate that we’re proud of and we love.”

CS: “It’s playing to the home crowd in a way. If we end up getting on radio and it ends up filtering out to a new audience then great, but we more had the fans in mind rather than the wider public.”

What’s the ambition with this record?
CS: “To solidify the fanbase and give them what they wanted to hear from us three getting in a room and playing music together. To give them more of the thing they wanted the first time round.”

James Bourne: “When you go away for that long and come back, fans get excited and expect a certain thing, and we didn’t give the obvious comeback album [with Night Driver]. We made something we wanted, which was fine.”

JB: “Yeah, but with the last album we made decisions without thinking about what our fans would say. We just did what we wanted. With this one, we definitely thought about the history of the band, our fans and we made an album thinking about that a lot more.”

We want to treat our fans well

MW: “As long as we can appeal to our fanbase… We want to treat them well and give them what they want because we love that as well, then there’s life in Busted. If you’re a new act, or a band that relies on Spotify and radio and these things and you don’t get them then it’s game over.”

Do you ever imagine what it would be like to be a new band?

CS: “I sometimes wonder how these bands live. It’s crazy. Because record sales are so low [now] and you rely on streaming, bands with guitars don’t really stream that well. The culture of young kids now is listening to electronic stuff. I know some guys in bands that are playing The Roundhouse and have to have a second job and that is just mental to me, alien. It’s crazy!”

MW: “Or, they can get 100 million streams, but can’t sell out Shepherd’s Bush Empire, it’s a very weird transitional period we’re in.”

CS: “We have more of a solid thing to rely on and we’re so fortunate to have that.”

How do you feel about the old, classic Busted songs?

MW: “I fucking love playing the old ones. Year 3000 has never not gone down well. It’s fucking amazing; we’ve got this ace up our sleeve. Wherever we are in the world, at a festival where no one knows who the fuck we are, we can play that and it resonates.”

What does the future hold for Busted?

MW: “We’ll probably have a chat in the summer, right now, we’re focused on the album and we want to make the most of it. Go on tour, and have a great summer of festivals hopefully.”