'What's important is getting demons out... Record sales never meant anything': Corey Taylor and Clown on 20 years of Slipknot 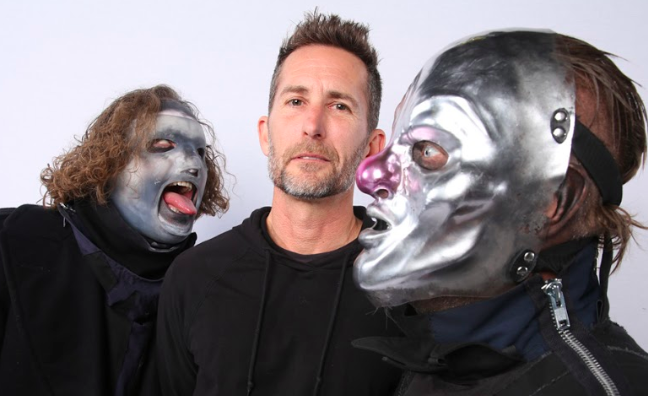 In the new edition of Music Week, Slipknot head-up our Rock Issue 2019, which also features Fender CEO Andy Mooney, Foo Fighters’ Chris Shiflett, interviews with the Download Festival 2019 team and much, much more.

In our huge cover feature on the metal titans, frontman Corey Taylor, percussionist/creative mastermind Shawn ‘Clown’ Crahan and long-term manager Cory Brennan of 5B Management give us the incredible story of their past 20 years together.

Slipknot return to headline Download Festival this weekend and release their new album We Are Not Your Kind’s on August 9 via Roadrunner Records. Their comeback was ecstatically received with new single Unsainted – which features a choir – scoring over 7.7 million streams in one week on Spotify alone while its video notched up 17m views in its first 12 days and trended No.1 on YouTube across all categories, not just music.

Here, in an unread extract from our cover feature interview, Corey Taylor – who at the time of speaking was recovering from a double-knee surgery – and Clown take us further inside their comeback campaign and assesses their impact across the past 20 years…

How have you felt about the reception to Unsainted so far?
Corey Taylor: “It was great man. Honestly, after we had the choir come in and sing on Unsainted, we knew we had something really, really fucking special. I remember the first time I heard it, I got fucking goose flesh. When you get that feeling, you know it. It was so hard to not go on social media and post about it. Trying to keep that a secret was so fucking hard, but I think that’s one of the reasons it knocked everybody on their ass, because they weren’t expecting it. Not only were they not expecting it, they weren’t expecting it to be as good as it was…”

Where did you actually get the choir from?
Clown: “They were from LA. Man, I’ve been waiting my whole career to get Slipknot around pianists, violinists, and cellists and choirs. But things have to happen for the right time. But we never pushed things because we wanted to do it, we did a choir because the song lent to it. I could hear it. Like, ‘This needs to have a choir!’. That’s when you take those chances, it’s when they’re right. You don’t push it, otherwise you fail.”

The industry has completely changed since you’ve been away, what is success to you right now? Do record sales still matter?
Clown: “What’s important is what’s always been important for me, and that is to be able to get the demons out and to be able to perform. I like to live through music and I like to take my pain and music and perform it in front of people who like to let out their pain and love. That’s number one. Record sales have never meant anything to me ever, and I’ll tell you why. I’m sorry I don’t know the exact fact, but I want to say it was [2008 album] All Hope Is Gone that finally helped [2001 record] Iowa to be certified platinum. Business begets business. From the time Iowa came out until the time it went platinum which was many, many years after, all I heard from people was that Iowa was the greatest metal album of all time but, fuck, it didn’t even go platinum until our fourth record. If I got caught up in record sales I would drive myself mad.”

Slipknot have had to endure some incredibly tough moments over your 20-year history. What has kept you guys together?
Corey Taylor: “I think it’s just the belief in what we do. It’s the love of the music, if that went away, we would, too. It’s just the excitement of writing new music, of creating new art, new content, and the excitement of getting that in front of an audience… The minute you feel like you’ve achieved it, that’s usually when people start to phone it in. The minute you feel like, ‘Ah, I don’t need to try that hard anymore’ that’s the death of a dream. That’s when a lot of bands just start to basically repackage the shit they’ve done before, you know? You can see it in their eyes, man, you can hear it in their voice and hear it in their approach. Something’s gone. It’s almost like the spirit’s left the body. Whereas we still feel that dedication, that urge to go above and beyond.”

When bands start to repackage the shit they’ve done before, you can see it in their eyes, man. It’s almost like the spirit’s left the body...

Do you think the music industry could produce another phenomenon like Slipknot in the future?
Corey Taylor: “I hope so. I honestly, truly hope it could happen. I’d like to think so, there are so many great bands right now and they’re so ferocious, and their attack on music is so fucking good that I feel like it’s almost a perfect storm right now for these bands to emerge. And honestly, we can’t do it forever, as much as we’d fucking to. Well, hey, trust me, I’ll do it as long as these new knees let me…”

Finally, what can the music industry learn from Slipknot’s story so far?
Clown: “I’m going to tell you, it’s easy, but I don’t know if it’s easily understood. All I know is you can walk outside your house right now and everything you see is somebody else’s idea. We live in a very, very, very fake world of safety. When a band like Tenacious D can win a metal Grammy with a cover [the duo controversially won a Grammy in 2015 for a cover of Dio’s The Last In Line, beating Slipknot’s single The Negative One], I mean, you tell me what they need to learn… What act do you have at something like the Grammys that is better than Slipknot? What you can learn from us is: ‘Why aren’t you letting us in?’ It’s because then you’d have to let more [like us] in, and then your show would change, and then your magazine would change and then your TV channel would change. I get it, but see what I said first is that we all live in somebody’s else’s idea. What you can learn from Slipknot is this is our idea, and it’s not a very general idea to allow in because it’s very extreme. I understand that. But if you’re not letting us in, you must not be letting a lot of stuff in, and isn’t that disservice? We perform real pain and give a real insight about human life and the experience of living reality – why are we not being invited in? I’ll tell you why, because everybody’s comfortable with the way things are, and I’ll tell you what, man, things aren’t good. Let’s learn how we can change. You might get healed, you might find some redemption and salvation.”