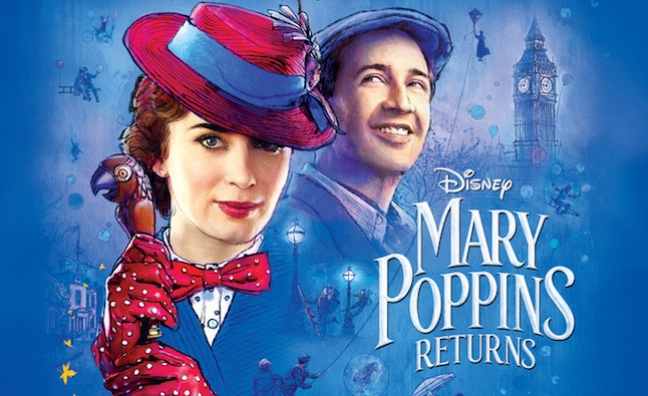 It’s been the year of the film soundtrack in the UK, and now there’s another contender.

Mary Poppins Returns looks unable to catch The Greatest Showman’s sales just yet. A year after its release, the OST to the Hugh Jackman musical is heading for No.1 again this week, which would be its 22nd week at the summit.

But with positive reviews for the Mary Poppins sequel starring Emily Blunt, its soundtrack could be in line for chart success in 2019. Nine new songs have been written by Marc Shaiman and co-lyricist Scott Wittman for the film, which is being released 54 years after the Disney classic. The pair have previously enjoyed global success for their partnership with the musical Hairspray and between them have Grammy, Emmy, Tony and Olivier Awards for their compositions on stage and screen.

The UK premiere was staged this week and the soundtrack came out last Friday. It features performances from Emily Blunt, Lin-Manuel Miranda, Meryl Streep, Emily Mortimer and Ben Whishaw, as well as original Mary Poppins star Dick Van Dyke. Here, Shaiman and Wittman responded jointly to Music Week about their update on a classic soundtrack…

Disney has been front and centre of film musicals for decades now. What was the general brief for the style of the songs for Mary Poppins Returns and what they needed to achieve?

“We understood that the music had to sound like it lived ‘on the same Cherry Tree Lane’ as the songs and sounds of the first film. It was our job to try to accomplish that without it seeming like we were out and out trying to imitate. Which is why you will not find any new song about a new, impossibly hard to pronounce, 34-letter word!"

There will often be one song that fans of a soundtrack pick up and run with – do you have a hunch for which one this will be?

“Only time will tell. We have already received quite a few lovely messages from people who were touched by the idea put forth in The Place Where Lost Things Go [performed by Blunt and Miranda]. But we’ll get back to you in a few months’ time!”

2018 has seen film soundtracks take over the charts. Was there ever a discussion to have any pop covers of the Mary Poppins tracks?

“No, there wasn’t. We all wanted to stay pure to the time and place of the movie and the style of the classic film musicals of the early ‘60s."

Hugh Jackman is touring The Greatest Showman and other songs from musicals next year. Would you like to see a concert featuring Blunt and Miranda built around your Poppins songs?

“Wouldn’t it be loverly! One can only hope such an evening could occur, they would both be up to the challenge! But for now, their fantastic performances on film will gladly suffice.”