"You can't even talk about record sales any more, it doesn't mean anything": Evanescence - The Music Week Interview 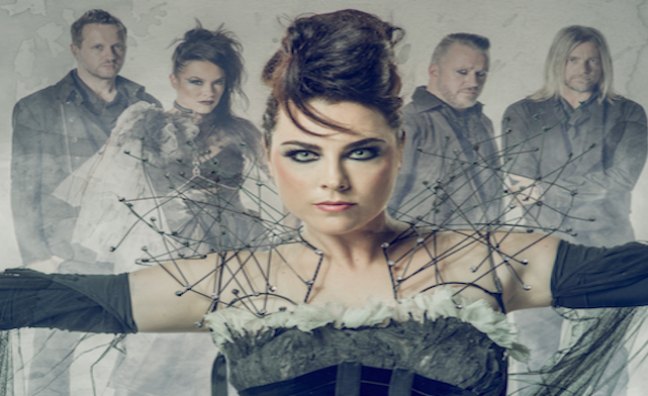 In the new issue of Music Week, we speak to Amy Lee about the return of multi-million selling rock phenomenon Evanescence and their highly-anticipated new album, Synthesis. Only their fourth studio release in 14 years, the record sees Evanescence - completed by bassist Tim McCord, drummer Will Hunt and guitarists Troy McLawhorn and Jen Majura – present new material alongside re-recordings of some of their most defining songs, all with orchestral accompaniment.

Lee told Music Week that while Synthesis explores the group’s latent orchestral potential with long-term collaborator David Campbell, it was also a chance to show how far their musical skills have developed.

“There’s a lot of musical skill that I personally didn’t have,” said Lee. “When we were writing Bring Me To Life I was 19! So just the musical ability that I had when I was 19 as a writer, as a singer, as an everything, I can do all that stuff better now because we’ve had all this time and experience. In addition, living inside those songs live for all these years, it just forever gives you ideas.”

Lee also opened up about the prospect of following the blockbusting success of her past, with Evanescence’s 2003 debut selling 1,324,026 copies to date in the UK according to Official Charts Company data.

"Fallen happened in the way that it happened," Lee told Music Week. "You can’t even talk about record sales any more, it doesn’t mean anything but we kind of got set in a way that I was okay. We made some money and I always have poured that money into the next project. I have this ability to use that resource and the fanbase that we got from all those people who heard our music in the first place and cared about it enough to stick around.  I can use that, I don’t have to start [a project] by going, ‘Help! I need to do a Kickstarter! I need to find a label!"

Synthesis sees Evanescence join RCA UK’s diverse roster alongside Paloma Faith, Beyoncé, Bring Me The Horizon, Jeff Lynne’s ELO, Nothing But Thieves, Zayn, HMLTD, SZA and more. It is part of a wider territory-specific deal that gave Lee “complete creative control”. Evanescence's manager Jordan Berliant of Revelation Management told Music Week why it made the most sense to adopt this approach when reintroducing the band to the world after a six year break between albums.

“The notion that one global label deal can deliver results seems to be 20th century thinking,” said Berliant. “The days of record corporations making something a global priority have long gone. As digital media expands and becomes more niche, it’s important to have partners in each part of the world that understand what works best in their region. Additionally, the internal economic structure of multi-national labels don’t fully incentivise efforts being made in international territories. It’s always better to be a domestic artist on a label so that’s what we achieved by doing uncrossed deals in each territory. We’ve been doing it this way for many years with artists who are fortunate enough to control their own rights. Essentially, we cut out the middle man and replace it with ourselves. It’s a lot more work for us as managers to coordinate these campaigns across the world but the results are worth the effort. We feel we have the best partners in each territory to create bespoke, innovative campaigns with us.”

To read the full Evanescence feature, see this week’s edition of Music Week, or subscribers can click here. To subscribe and never miss a big music biz story, click here.