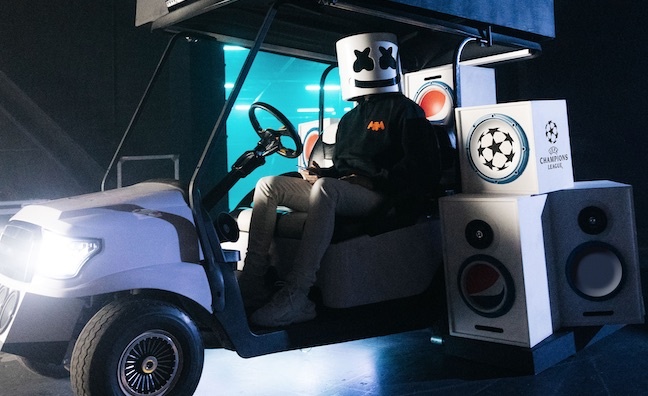 Marshmello is set to play the opening ceremony of the 2021 UEFA Champions League Final.

The match, which will take place in Porto on on May 29, will be contested by Manchester City and Chelsea.

“This really has been a year like no other. I’m looking forward to giving my sport, music, and pure entertainment fans a show like they have never seen," said Marshmello of playing ahead of kick off.

"Thanks to Pepsi and UEFA, that is exactly what I am going to bring to the world - a performance that everyone can enjoy.”

“We are excited to be collaborating with Pepsi for another year, uniting music, entertainment and sport to delight fans all over the world,” he said.

“Our close partnership has had great success in bringing huge names and epic performances to the UEFA Champions League final, and we know that Marshmello will put on an unforgettable show.”

The 2021 final's opening ceremony is the fifth to be presented by Pepsi and will see Marshmello deliver a virtual six-minute spectacle using the latest in immersive technology.

“Pepsi has been building the Opening Ceremony platform alongside UEFA since 2016, and this year’s show will take it to the next level," said PepsiCo’s vice president, marketing, global beverages, Natalia Filippociants.

"While there might be fewer people in the stadium this year, there will be no less energy and excitement. Marshmello is the perfect artist to kick start this year’s UEFA Champions League final with heart-pounding joy and a set list filled with anthems of celebration that transcend genre, appealing to football and music audiences globally. Fans should watch for more exciting announcements - including some special guests - so stay tuned.”