'Sony are taking it into a new era': The enduring appeal of The Annual compilation 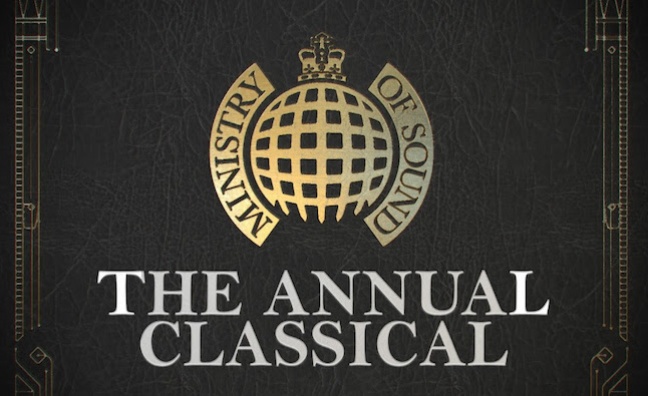 Ministry Of Sound’s compilation series The Annual is getting a classical makeover. As revealed in the latest issue of Music Week, there are global ambitons for The Annual Classical tour, following the production’s world premiere at the Royal Festival Hall on Saturday (January 26) and spring/summer UK dates.

The Annual Classical will feature dance tunes from the ‘90s performed by an orchestra, along with DJ Judge Jules and original vocalists. The show also has a documentary about the compilation, which launched in 1995 with a mix by Boy George and Pete Tong, who’s now got his own classical dance project.

The 2019 edition of the compilation has been a Top 10 fixture and has sales to date of 46,342, according to the Official Charts Company. While the club brand is handling the tour, Sony Music acquired the recordings side of the business in 2016 and recently launched exclusive Ministry Of Sound playlists on Apple Music, including The Annual.

Amy Wheatley, GM of Ministry Of Sound Recordings, said: “A recognisable and reputable brand means something in the market. Conception and curation have always been the key driver and focus for any compilation. The deal with Apple buys into that ethos of curation of the brand and that holds value for the audience. The Annual will always be the flagship brand for MOS and will continue to evolve with the market.”

Here, Ministry Of Sound’s chairman, Lohan Presencer, looks back on the history of the “biggest commercial dance compilation”…

How big a project was The Annual when you worked on it at Ministry?

“It is quite a shock to my system now not having to work on an Annual. The first Annual I was involved with was the millennial edition, which was volume five. From the moment the previous one was released, once Christmas is out the way, we would start thinking about the following year’s one.”

Why do you think the annual has endured, in a tough compilations market?

“I just think it was a great idea. I believe it was originally conceived by Mark Rodol, who was the creative director of Ministry of Sound at the time. Ministry had been doing their DJ-led sessions compilations up until the first Annual. When we were all growing up, you used to get your Beano annual and your Dandy annual for Christmas. Mark had this idea that, why wouldn't you have a CD that was a compilation of the best dance music of the year, with a booklet that contains all the goings on in clubland? There was a lot of stuff on club culture. It was all beautifully produced, really nicely packaged and there there was an epic TV ad that went alongside it. When the Annual came along, there was nothing that had ever been like it before. It became a staple in people's Christmas stockings. It genuinely encapsulated everything that was going on in clubland in each year.”

Did you license a lot of the tracks?

“The ambition was to achieve the best dance album of the year, with all the best tracks from all the labels. Most of the time we managed to do that.”

Is there a particular favourite edition?

The best-selling dance compilation of all time was The Annual volume 2, mixed by Pete and George [613,804 sales – Official Charts Company], that's got a classic tracklist. The first time I worked on it for the Annual millennium edition, that was the silver one with the purple logo. You can name the year and I'll tell you exactly what the Annual looked like that. That was an epic year, that was the year of trance. That had stuff like ATB, all of those big classic, anthemic trance records were a big feature of it that year. It was a huge year for dance music, 1999. There was a really good one at the end of 2004, which was a resurgence of house music led by our Eric Prydz Call On Me record. That was a really big year for the Annual and it really picked up, sales increased dramatically then from the previous year.”

Were there ever any tricky tunes to license?

“Stardust’s Music Sounds Better With You. There were some epic stories about people travelling over on the Eurostar to try and sway Thomas Bangalter from Daft Punk. It was such a huge anthem, it was in 1998 and it was without question the biggest dance record of the year. Ministry had the team over to Paris to meet with him to try and persuade him to put it on, and were sent home with a flea in their ear. It didn't appear on any dance music compilations until we put out Ministry Of Sound Anthems II, which came out in 2008. [For 10 years] it was just not licensable, they didn't want to be on a compilation.”

Did a lot of effort go into the packaging?

“Yeah, we had to make a decision, because you never quite new how popular it was going to be. So you’d have to make guesses as to how many booklets you were going to print, and sometimes you'd get caught out and the demand would be so huge that you were desperately phoning round the CD factories and the printers saying, ‘Please can you get them more quickly, I need to get them on trucks and get them shipped out to the shops’. Because obviously the huge demand was in those last two or three weeks before Christmas, when everyone was frantically going into all the lovely record stores that used to exist.”

Are you hopeful the brand will continue under Sony in this tough compilations market?

“Oh yeah, I think so. There's always a demand for it every year. It's really nice it's being released on Apple Music for the first time, as a streaming playlist. Sony are taking it forward into the new era. Apple have been fantastic partners for Ministry of Sound over the years, and certainly when I heard about that deal I was delighted that they were able to do something like that together.”

How do you work with Sony Music on the MOS brand?

“We all talk regularly, we are two companies living under the umbrella of the same brand, so we all discuss what's going on in the club, what's coming out on the label, what's going out in the compilation business, what event we're putting out on tour. We try and complement each other, we try and coordinate activities and try to maximise the benefits of that partnership.”

To read the interview on The Annual Classical and its global ambitions, subscribers can click here. To subscribe and never miss a big industry story click here.