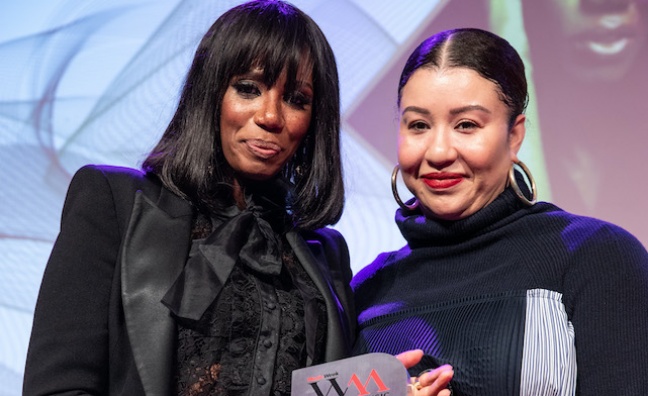 Music Week is running interviews with all the winners following the ceremony.

How did you react to the news that you had won this year’s Music Week Women in Music Inspiration Award?

You’ve had a really amazing career so far, as a young girl could you have foreseen this is what was ahead of you?

“No, not at all. Obviously, back in '98, we were 21, 22 and I look back and think how young I was really, to achieve what I've achieved. And to think that I'd still be in the industry 20 odd years later, I never ever would have seen this at all. I feel really lucky to still be in a career doing what I love and it never feels like work. It never feels like a chore. Every day I go to work, I really appreciate what I do.”

What are some of the moments in your career that really stand out to you, or have really meant something?

“Melanie and I used to lay in my bed at night, as teenagers, wishing on things. At that time, our biggest goal was to appear on Top Of The Pops, because we grew up watching that show. So, when we did, that was huge for us. I think we thought: 'This is it’.”

You’ve achieved so much… Anything else?

“I’d definitely say winning an Ivor Novello Award and a BRIT Award, but the Ivors more so for me because that's the first time I really felt like a songwriter and like I had achieved something not due to anything external. My dad really wanted me to go to university and I didn't because I just wanted to pursue a career in music and so for me that sort of felt like, in terms of making my parents proud, that I really achieved something.”

Do you think All Saints helped to break down a few barriers when it comes to women having a bit more say and being able to exert themselves more in the industry?

“I hope so, in terms of not having to be this sort of smiley polished dolly rocket. I hope that we've portrayed that it was okay to be moody, you know what I mean? There's a part of me that thinks we've kind of stepped back a bit now in terms of a lot of females that are more overly sexualised. I just think we were the opposite of all of that. When I look at somebody like Billie Eilish, she's like a modern-day version of what we were. I love that she doesn't smile, wears oversized clothes and doesn't necessarily feel she needs to show her body to be subjected to being over sexualised.”

We've got fantastic black British female songwriters now, but in the 90s there weren’t many of them

It’s amazing that songs like Never Ever have stood the test of time. This is a song you wrote which was very personal to you. What are your thoughts on that song today?

“When you are a particular age there's like a vulnerability there, an innocence, when it's your first time experiencing those feelings. I think now as a 45-year-old woman, if I experienced anything like that, I'd probably be a lot more mindful of sharing, you know what I mean? And probably be a bit more guarded, when writing about something like that, which is a shame, because that shouldn't happen.”

What song that you've written are you most proud of?

“I suppose when we do shows, it's definitely songs like Pure Shores and Never Ever. I think a lot of people that come to those shows, we've done the journey together. That's what I like, and that's what I really enjoy, seeing how happy those songs make people feel. And, I get it, because everybody knows where they were at that time and what they were doing. And that's the same for us, like we know exactly what we're doing at that time. And all the good fortune those songs have brought us, through the people who enjoy them, has been great.”

You spoke about what winning an Ivor Novello award meant to you, and now you are chair of the Ivor Novello committee. What is your role and how did you get involved?

“This year was the first year that I chaired it, but I've been a part of the committee now for a good few years, and I absolutely love it. I've got so much respect for the Ivors. I just love what it stands for because there are so many people that without the Ivors would never get recognised for what they do, amazing and talented people.”

Who are some of your favourite songwriters in the UK right now?

Following the murder of George Floyd last year and the Black Lives Matter movement, quite a few black female popstars have shared stories of being mistreated in the industry due to their skin colour. Have you had any experience of this?

“I think there are things that have been brought to the forefront now, and hearing some of those stories, I definitely didn't experience that. I don't know whether that's because me and Melanie were founding members of All Saints, and then me being the predominant writer for the band. Maybe those things didn't allow for that to happen.

I think the only thing I did experience was more when we did shows, and I didn't see as many people that looked like me in the audience. Having said that, that was never my reason for making music. I grew up in a home where my parents played a lot of reggae and a lot of you know, lovers rock and that kind of visibility. But then I was a child of the 80s and I grew up listening to Capital Radio, so I had all these different influences in my life.”

And what would you like your legacy to be in the music industry?