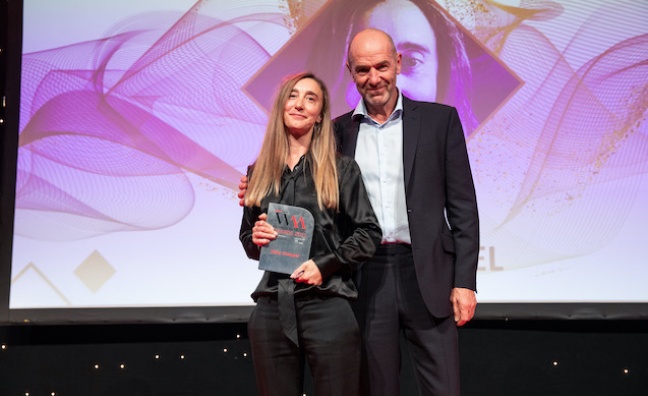 The Music Week Women In Music Awards returned for the first in-person event in two years to honour 12 incredible executives and artists.

Staged in partnership with AIM and UK Music, with YouTube Music as headline sponsor, the ceremony took place at the London Hilton, Park Lane on Friday, October 22.

How do you feel about being named a Live Music Inspiration?

"The word inspiration took me by surprise actually. Perhaps it shouldn’t have done: in my field, as a concert promoter, I’m probably one of the most senior women. But inspiration feels like such a big word. Your mind goes to someone like Gloria Steinem who has inspired millions of people. Also, for people like me, working-class Geordies, we don’t really think of people in our family winning awards. When I phoned my parents my mum actually screamed.

"And Music Week is our bible, so it means a lot to me. I’d read other people’s interviews and think, 'oh wow’, and now it’s me, which is pretty neat. Overall, I’d say I’m humbled, because there are a lot of amazing women out there."

How did you start out in the music industry?

"By managing a restaurant, believe it or not. It was called Gascoignes, in St John’s Wood, and it was owned by Andy Fletcher from Depeche Mode. At that point I wanted to be the next Mary Anne Hobbs. Andy introduced me to people like Barbara Charone and Rob Stringer. He was also running his label Toast Hawaii. We’d sit up at the bar late at night and he’d tell me about that and about being at Mute. I started a small management company with one of the guys who came into the restaurant. It wasn’t very successful, but I learned a lot and met a lot of people. I got my bands out on tour and drove the van. It turned me into a road warrior.

"Then I was scouting for PIAS and running a monthly club night called Where’s My Head At. A guy I used to talk to at Live Nation told me about a job that was going. I did the interview and they liked me and I’ve been here for 17 years. I'm probably the only senior vice president that has a trampoline in their office and bounces around on it throughout the day. Just for fun, to make them laugh in the office because it’s a good reminder that we're not saving lives."

What’s been the most significant moment of your time at Live Nation?

"There have been many, but the lowest and the highest came together. I was the promoter for the Ariana Grande concert at Manchester Arena on May 22nd, the night it was attacked in 2017. And I was also the promoter for the One Love concert the following month. Denis Desmond [Live Nation CEO] called me and asked if I wanted to do it. We weren’t promoting it in the traditional sense because we gave away 14,000 tickets to the people that were there on the night and the remaining weren't very expensive, because we didn't want to have an expensive ticket price.

"We had emails from quite a few of the people with tickets saying things like, ‘I was okay going with my friends last time, but I don’t want to come without my mum this time’. So it was about making things like that happen. I remember standing with all of these people, thinking that we’d turned it around in such a short time and I’d been part of making that happen."

Every act is different, you can’t take a cookie cutter approach

You’ve mentioned Ariana. You’ve also worked with Rihanna, Nicki Minaj, Billie Eilish and Lizzo to name a few. What’s the difference, for you, between working with established acts and emerging ones?

"I started at Live Nation to promote emerging artists and that’s always going to be my first love. I love new bands and I listen to new music all the time - and i’m not just saying that because I’m being interviewed.

"Every act is different, you can’t take a cookie cutter approach. I love taking an artist from being a small act to an arena-level act, whether that’s been First Aid Kit or Bon Iver to the heady heights of Nicki Minaj. Also, acts break at different levels. When I started working with Ariana Grande it was already at a high level because American pop acts break quickly and that means ticket sales. And then there’s another route for a band like The Arctic Monkeys, for example, whose first gig outside of Sheffield was at Highbury Garage. I always tell bands not to skip a step and enjoy each one."

You’re involved in several initiatives to help other women. Can you tell us about them?

"The Live Nation Women fund was started in the US and I sit on the board. It’s money to help entrepreneurial women and young businesses. It could be anything, perhaps seven female tour managers getting together as a network, a small sustainable festival in Australia or a female-run record label. The Women’s Promoter Council is where we try to bring in women to become promoters, backed with support from us in the office."

Coronavirus has made the last two years exceptionally tough for the live industry. How is it now?

"We’re back and we’re selling tickets, which is great. I think there’s been a little bit of trepidation and obviously I’m only speaking for this country at this point but there’s a real buzz out there. I can’t predict what the government will do next, but I’ve tried to focus on guiding the acts I work with to the best of my ability.

"I’m a very upbeat person - I mean, I have a trampoline - but it was heart wrenching. I felt, for the first time in my life, what it was to be depressed. Something I love was taken away and it broke my heart. I was miserable and I had no answers. Now I feel like I’m back to myself. We’re still living with the pandemic, I’m not underplaying that, but I feel really positive about the future and about concerts and about people of all ages wanting to go to concerts. I think we’re in for a big 2022."