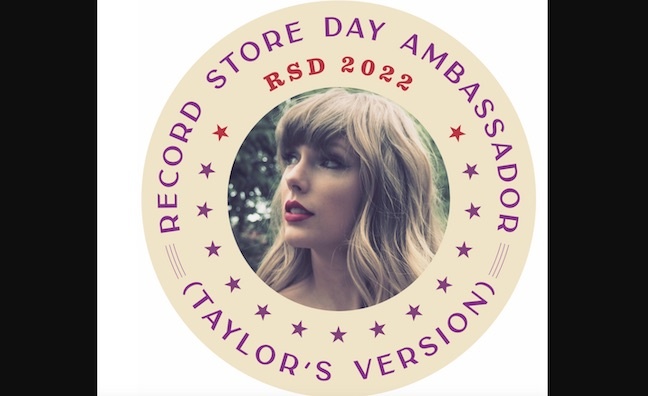 Depending on your point of view, it will either feel like Christmas has come late or very, very early right now. A host of superstars – including Taylor Swift, David Bowie, Childish Gambino, Prince, Elton John, The Rolling Stones, Pearl Jam and more – have confirmed special releases for this year’s Record Store Day 2022.

Notably, this year’s vinyl extravaganza reverts to taking place around the world on a single day this year, rather than the multiple drops.

Back in January, Taylor Swift was revealed as the global ambassador for Record Store Day 2022 and will release a 7” of The Lakes. According to Music Week research, Taylor Swift was the second biggest artist in terms of vinyl sales in the UK last year. Only The Beatles moved more LPs in 2021. Taylor Swift had three entries in the US Top 10 vinyl albums of 2021, according to MRC Data.

Among some of the key other releases to look for are: David Bowie's Toy EP and Brilliant Adventures, Childish Gambino’s Kauai being released on vinyl for the first time, Joni Mitchell’s Blue 50: Demos, Outtakes And Live Tracks From Joni Mitchell Archives, Vol. 2, Elton John's The Complete Thom Bell Sessions, Pearl Jam’s Live On Two Legs, Prince's The Gold Experience Deluxe. That's not to mention The Rolling Stones’ More Hot Rocks (Big Hits & Fazed Cookies), Sam Fender’s 7” Alright/The Kitchen (Live), Madonna’s Who's That Girl / Causing a Commotion 35th Anniversary, plus limited edition picture discs from The Cure and Holly Humberstone. For those of a maritime persuasion, Sailing By – the theme from BBC Radio 4 Shipping forecast – is also getting a 7” pressing.

Another star taking part is PinkPantheress, who’s releasing her 2021 mixtape To Hell With It. Speaking about taking part in this year’s event, she said: "I’m happy to present my first vinyl for people to put in their homes this Record Store Day. I hope that fans enjoy listening to this record as it was intended, through some vintage speakers. Records are such an important part of music history and the reason a lot of people were able to inspire the artists we love today”.

Record Store Day regular Billy Bragg – who will release a coloured vinyl version of his debut to mark its 30th anniversary edition of his debut album, Life's A Riot With Spy vs Spy –  said: “I was excited to be involved in the first Record Store Day and, 15 years later, I'm amazed to see how this initiative has grown. But this year it feels more important than ever to be taking part. The pandemic has been tough for retailers and artists alike, causing havoc at vinyl pressing plants and making it difficult for musicians to tour. So it’s crucial that we all get involved and make this year’s RSD the best one so far.”

This year’s edition of Record Store Day follows a recent report from the Entertainment Retailers Association which revealed that vinyl sales in the UK are at their highest level in over 30 years, growing a further 23% year on year in 2021.

Mina Koroma, store manager at Liverpool’s Jacaranda Records, said: “We can’t wait to see Record Store Day back in full force at Jacaranda Records. Our community of musicians, DJs and record fans thrives on getting together to share ideas and experiences. RSD is always a great chance to do that, especially at such a challenging time for shops like ours. We’re excited for scenes all over the UK to keep growing their collections and adding to their fond memories of times spent at record stores.”

An official press release stated that if Record Store Day releases are affected by the current vinyl manufacturing delays “they will instead be available to buy in participating RSD stores on Saturday June 18”.

The Record Store Day UK site will list the titles affected over the coming weeks.