"We invite the music industry to get in touch": New Space Rocks event seeks biz collaboration 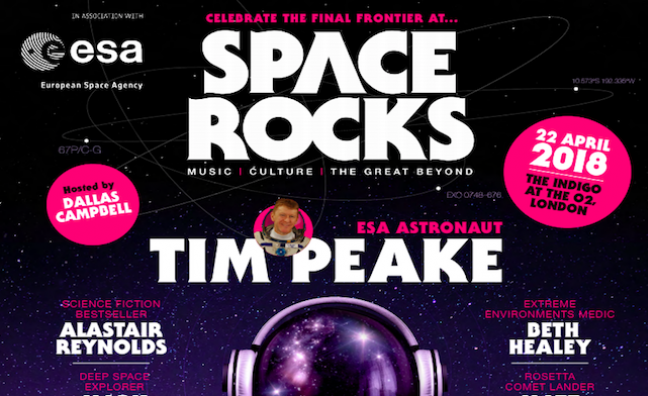 Media consultancy and production house Twin V have unveiled details of Space Rocks, a brand new series of events celebrating space exploration and science, and the art, music and culture they inspire. The event, set to take place on Sunday April 22 at the Indigo in London's O2 Arena, is presented in association with the European Space Agency (ESA) and will be hosted by renowned science broadcaster Dallas Campbell.

As part of the family-friendly proceedings, live music will be provided by former Ash guitarist Ash guitarist Charlotte Hatherley and Lonely Robot - artists whose love of sci-fi and space travel has influenced their most recent albums.

Speaking about the inaugural event, Twin V director Alexander Milas said: “This is a hugely exciting time for space exploration - from missions to mars to landing on comets, and it’s inspiring people’s imaginations like never before. Our goal is to bring space science and the incredible artistic expression it inspires under one roof for an unprecedented celebration of the final frontier - all in partnership with one of the most remarkable, innovative and groundbreaking organisations in the world: the European Space Agency.

Our pilot event will feature panel discussions with top space scientists, exhibits, a rocket design competition for the the young ones, a live gig, and astronaut Tim Peake - who spent months in orbit. We invite the music industry to get in touch with their ideas for collaboration - this is an amazing opportunity for collaboration. The sky literally isn’t the limit, and we’re only just beginning.”

Prof. Mark McCaughrean, senior advisor for science & exploration at ESA and Space Rocks co-founder, added: “The response to our Rosetta comet-chasing mission was fantastic and captured the imaginations of children and adults around the world, as well as artists spanning music, painting, sculpture, film and much more. We wanted to create a more permanent ‘home’ where that shared passion for space, science and the arts can come together and inspire the next generation of explorers, whether they stay here on our precious planet, or venture out among the stars. Space Rocks is that place.”

The first one-day event will runs across three separate ticketed sessions in which attendees will have the opportunity to interact with world-famous space scientists and other representatives from ESA to discuss anything from life on other worlds to how to become an astronaut or rocket scientist, and even the prospects for interstellar travel. There will also be spacecraft models, demonstrations and the opportunity to buy Space Rocks merchandise and more.

Details of the sessions can be found below

From the most recent developments in space science to what is currently occupying the great minds of space exploration, this is an opportunity to get answers to those unanswered questions from the experts themselves. There will also be a rocket-design competition for the under-16s, with special space prizes to be won.

Science Fiction vs. Space Fact will look at popular portrayals of space and space exploration and see how they stack up next to the work being done every day, featuring ESA senior science advisor Professor Mark McCaughrean and science fiction bestseller Dr. Alastair Reynolds, with more names soon to be announced.

The final session is live music from artists whose love of sci-fi and space travel has influenced their most recent albums – former Ash guitarist Ash guitarist Charlotte Hatherley and Lonely Robot. Hatherley is a frequent collaborator with the likes of Bryan Ferry, KT Tunstall and XTC’s Andy Partridge. Her current solo project is a cinematic, sci-fi-inspired breakup record, True Love, which will be making its live debut at Space Rocks.

Lonely Robot is helmed by the award-winning multi-instrumentalist, producer and composer John Mitchell. Their 2017 album, The Big Dream, is the second of a three-album series that depicts the story of an astronaut’s journey through deep space. This one-off show for the band follows a string of sold-out shows in 2017.

If you would like to be involved with the Space Rocks event, you can contact Alexander Milas at: Alexander.milas@twinv.com