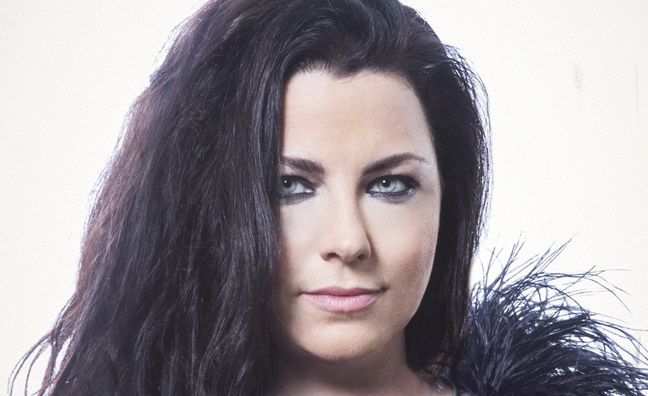 In the current edition of Music Week, Evanescence star Amy Lee takes on our Aftershow feature to reflect on her life and times in music. From Grammy wins to selling more than 23 million albums worldwide – with sales of the group’s 2003 debut Fallen selling 1,348,108 copies in the UK alone – it has been quite the journey.

Late last month, Evanescence released Wasted On You – the brilliant lead single from their upcoming album The Bitter Truth. While the group reimagined their old tracks with orchestral and electronic flourishes for their 2017 outing Synthesis – you can read Lee’s Music Week interview on that project here – The Bitter Truth will be their first new studio record in nine years, which will be released incrementally throughout 2020.

In her Aftershow interview, Lee talks about her battles for creative control, why she used to struggle with their smash hit Bring Me To Life being their calling card, and gives an update on making their new album under lockdown…

“We have a handful of songs that are already mixed and finished and ready to go,” Lee told Music Week. “They’re all different, but I think so far the one thing that ties them together is it’s going to a place that’s even more raw. The last thing we put out was our orchestral and electronically-driven reimagining of old songs on [2017’s] Synthesis. That was incredible, as was the experience of performing with a live orchestra, but it took a lot of work on an internal level. By the end of it we were all really ready to get back to rocking. I don’t want to say our new album is stripped back, because it’s not – it’s big, powerful and luscious. But we haven’t done any orchestra [parts] on any of the new songs, and that’s not because we couldn’t get together with one because of the pandemic! We’re still writing our new music and the pressure’s definitely on now we’ve released Wasted On You. We lit the fuse and now we’re screwed [laughs]…”

Here, in an unread extract of our interview, Amy Lee delves deeper into the making of their new album…

Wasted On You wasn’t originally going to be your comeback single – how big a decision was it to change the plan?

“So, we’d been writing for a year, plus we also have a library of ideas that are always in the bank – little pieces, some up to 10 years old, that sometimes find a home, and one of the really old ones did! But a lot of this stuff is new. For that particular song, I started writing it on New Year’s Eve. So it’s really recent. It’s definitely completely different for us to write something so recently and be able to have the gratification of releasing it so shortly afterwards – we weren’t expecting that. The band came in and really made it what it is when we were together. With the song we were planning on doing first – and I can’t describe it, I don’t want to give it away – it’s powerful in a different way. Over the past couple of months, it’s really felt like every day is a new situation a lot of the time. Like, ‘OK, what’s the emergency today? Where are we going? How long will this last? What is this feeling?’ Two months ago I was in Japan on a totally different track, getting ready for a really big tour, putting on the biggest production we’ve had in years, and so many things that have now totally shifted in a new direction. Everything feels fluid. And I want to live that way on all levels of my life if I can: hold loosely to strict plans and think and live more in the moment as a person, and as an artist. Just a few weeks ago, I was like, ‘This isn’t the right time for the other song’. It felt so right, and then it didn’t in this moment. [Wasted On You] did, so we said, ‘Let’s go with it – let’s go with our feelings and release this now.’”

You said the “pressure’s on” to release the album now you’ve unveiled the first single ­– how much of it is actually done? Is it being finished under lockdown?

“It’s not finished, we’re still writing our new music. We have some that we have finished and that have been recorded and mixed, but we have a lot that aren’t – I would say the majority still needs to be done and here we are stuck in our houses! We do well playing together, for sure, and part of the writing must happen that way. But the beginning phases of songs are often us sending each other tracks and feeding off each other’s ideas and sending them back and forth. So, we’re going through that with another new song and just continuing things rolling until we can get back together recording again. It feels good to do that. To release something we only wrote a couple of months ago is wildly awesome!”

Following on from your orchestral and electronic experiments on the Synthesis album and tour, you said you’re ready to "get back to rocking" on The Bitter Truth. What’s at the heart of that change?

“[After Synthesis] we went back on tour in a way that was back to the original style, which felt really good, and at the same time we were just dying to make new music. At this point now, making the music that we’re making, it’s not that it’s a complete pendulum swing the other way, but we’re in this sort of empowered new place where the five of us really gel and have played live together a lot at this point. We know how to feed off of each other and work off of each other and create things in the moment we’re in together, which is really good. The writing process that we’ve been going through over the past year has felt really fluid and good, and I always like to start the process with a totally open mind, so just seeing what we sound like through trying things out has been really refreshing. As we were doing what we were doing, we were enjoying the sound that’s core to our live feeling so much that that’s the direction of music we’ve gone in from so far.”

Evanescence have always taken their time between releases and avoided the treadmill of recording, touring and releasing every two years. How important has that been to the band? What do you think would have happened to you if you had kept churning records out?

“We’ve put out a lot of music, and I love it all, I honestly do. There have been times where I just hate [2003 single] My Immortal. You listen to your old stuff like, eurgh! I was 19 years old, and I didn’t even know what I was talking about, I was so dramatic! It’s like reading your diary. But, I’m over it! It’s actually grown into something bigger than it was when I was 19. I’ve had so many more moments onstage and face to face with our fans hearing and seeing and feeling what it means to them, to me and all of us together in this beautiful, spiritual way. There is a history to this music – especially our older stuff – that now has resonated through time and my life in a way that it all means a lot. I’m proud of all of it. Sometimes that takes a few years of figuring out who you are and what you want to say, or just getting to the place where you feel like you have something like, ‘This is what I want to share’. And, also, you have to live life to come up with new ideas, you have to step away sometimes and feel some things and go through some things, and have experiences before you know what you need to get off your chest. And there’s been plenty of things that have happened to me and plenty that I have to say now.”

You spoke about how you once used to feel uncomfortable about Bring Me To Life being the group’s calling card. What is your relationship with it now?

“It’s funny. That’s a great question, because I’ve struggled with it. I’m cool with it now, but it was one of our big early struggles – that big rap thing. Having that male vocalist on our first song to me was a lost battle in a lot of ways, because I badly didn’t want to show our first song to people and have it not be a full picture of who we are and have it be slightly left of that with two singers. That’s confusing, like, ‘What is this band?’ That really worried me being our first song, I didn’t want it to be – I wanted it to be Going Under. But when it happened it did great, it was a wonderful thing and there was a lot to be excited about, but in the back of my mind I was a little bit scared. I’m very grateful things went the way they did because we released Going Under and that did well too, and My Immortal did well. I know by now, but even a long time ago, I felt like we put enough ground beneath us beyond Bring Me To Life to really show a clear picture to the mainstream people of what we are still. I believe in my work and we do have so many beautiful and wonderful people of all ages from all countries over the world that have loved our music and been touched by it.”

Finally, you said you’ve had to fight constantly in your career to ensure creative control. From that experience, what does the music business need to remember more often?

“That it should be driven by art [laughs] and the artist, for sure. The world, technology, all of it, is ever-changing. Every day there’s some different new idea – and they come from artists. The industry should be following those ideas. I’m not complaining like it doesn’t happen, I’m watching it change and it’s a beautiful thing, but they need to stay on their toes and keep changing to follow what the artist wants, to be able to put out music in different ways, put it out at different times. This is driven and started by artists, so let the artist lead the way.”