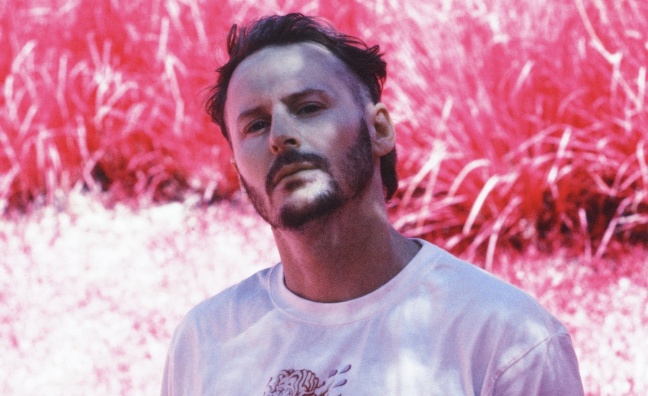 Ben Howard is back with a new album, Collections From The Whiteout (Island), which is a strong contender for No.1 this week.

According to the Midweek Sales Flash, the BRIT-winning singer-songwriter’s fourth album has sales so far of 12,192, according to the Official Charts Company. If it makes it to No.1, it would be his second chart-topper following 2014’s I Forget Where We Were (261,041 sales to date).

“Obviously it would be great,” said manager Owain Davies, director of OD Management. “We're always aiming for No.1, but it's not just about the week one. One of the positives about this last year has been that we’ve been able to bank so much content, and work with so many incredible creatives. Ben is [usually] so immersed in his touring and it's such a massive side of his world and his art. But this year has obviously been very different.”

The album was recorded in various locations, including Paris, Devon and New York. Howard is now based in Ibiza.

“We managed to finish the record just before the lockdown,” said Davies. “It was just before Donald Trump was closing the borders, we literally finished the record and snuck out of the States just in time. So we've been sitting on it a little while, but we'll be able to keep feeding content out there in the next couple of months. We’ve got plenty of plans, not just for the coming weeks but for the year ahead.”

Howard recruited The National’s Aaron Dessner as producer on the album. As well as being a fan of The National, Howard had admired the People Collective, the collaborative project spearheaded by Dessner and Justin Vernon.

“It’s the first time he’s actually worked with a producer,” said Davies. “I think he just enjoyed being able to lean on somebody else.”

Davies also noted the “amazing musicians” who got involved with the record through Dessner, including jazz drummer Yussef Dayes, Kate Stables from This Is The Kit, James Krivchenia from Big Thief and Kyle Keegan from Hiss Golden Messenger.

As well as being the producer, Dessner also played on the record as needed.

“Ben’s always been a fan of Aaron’s work,” said Davies. “Since we finished the record, he’s obviously a had so much success with Taylor Swift. He’s just lovely guy and Ben just really enjoyed being in his zone, along with his engineer John Low.”

Davies admitted that they were surprised to see Dessner’s collaboration with Taylor Swift on Folklore, which was recorded after Howard’s record but rush-released in July. As co-writer and co-producer, Dessner won a Grammy for Album Of The Year.

“We couldn't believe it, one day it just got announced on a Thursday and suddenly the next day it was out,” said Davies. “So with his recent Grammy success as well, it’s been an amazing year for him.”

“That first record was so well received in the streaming world,” said Davies. “It’s now coming up to the 10th anniversary and he's got a really got huge following on those platforms.”

Noonday Dream, released in 2018, peaked at No.4 although its sales of 42,207 were below Howard’s usual performance.

“There were quite a few changes in the label at the time,” said Davies. “But he won an Ivor Novello off the back of it, which is obviously a dream for any artist, and we finished that campaign with four Brixton Academies as well. The foundations are well set for this one, we’re just excited to get these tunes out there. There are so many different flavours on the record, and it's just nice to feel there’s so much positive energy around it.

"I've got to say a massive thank you to the entire Island Records team for working tirelessly over the past year, in particular Sam Lunn, Al Smith and Guillermo Ramos. The list goes on and they've left no stone unturned. Louis Bloom has assembled a great team there."

The next step of the campaign is an ambitious outdoor livestream, filmed at the iconic Goonhilly Earth Station on the Lizard Peninsula in Cornwall. The global ticketed event takes place on April 8.

“We've just had to get creative and it's obviously been a challenge without live,” said Davies. “This is a super adventurous plan, it’s going to be a challenge. We're super excited about the idea of playing in front of a giant satellite station. I imagine it will be the Cornish equivalent of Pink Floyd live at Pompeii!

“Out friends are promoters down there, and Ben's always loved the idea of performing a headline show there. It’s where Ben and I went to art college, that's where we met. It's going to be amazing to go back there, hopefully we can pull it off. We’ve sold thousands of tickets, he’s got such a strong and loyal fanbase. God knows when we'll be able to return to North America and elsewhere, so it's a nice opportunity for fans further afield to come on board. The livestream has also been an amazing excuse to get the band and crew back together after such a tricky year.”

While Howard has announced a pair of Royal Festival Hall shows for September, full tour plans are set to be confirmed when the pandemic situation is clearer.

“He's gone around the block a few times,” said Davies. “Back in the early days, even before signing the record deal, we probably did about three European tours alone. He’s got an amazing following all over, so we’re excited to get back on the road whenever we can and play some shows.”