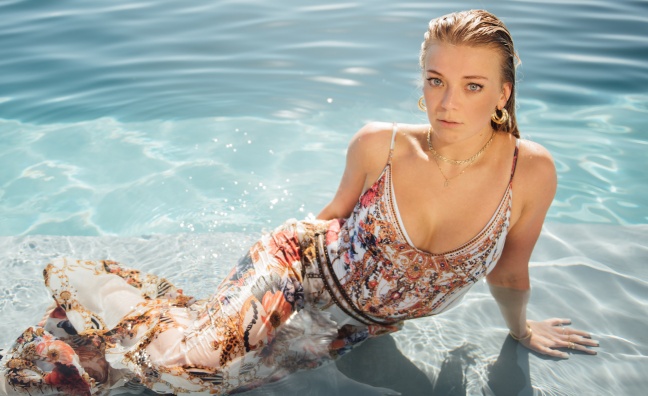 Becky Hill's management and label team have lifted the lid on the singer-songwriter's huge 2022 and future plans in a new interview with Music Week.

The Polydor-signed hitmaker's debut album Only Honest On The Weekend (107,843 sales, OCC) recently went gold and returned to the UK Top 10 this month a year after its release (August 27, 2021).

Hill claimed Best Dance Act at the 2022 BRIT Awards and also boasts three singles in the current Top 40 - her David Guetta and Ella Henderson collaboration Crazy What Love Can Do at No.5, the Joel Corry link-up History at No.18 and another Guetta collab, Remember, at No.34.

"Here we are a year after the album came out and it's back in the Top 10. It's amazing," Polydor president Ben Mortimer told Music Week. "That's just not something that happens in this world, where the Top 20 is so full of Best Ofs or one or two albums that have stuck around.

"For a new British artist to be in there - in an environment where often an album can fly in high, but then disappear the next week - is something to be lauded."

We have always known she is a trailblazer in the dance community, but it has been a special moment seeing her being recognised by the nation

The former The Voice contestant, who hit No 1 as guest vocalist on Oliver Heldens’ 2014 single Gecko (Overdrive), signed to Polydor five years ago this month.

"Years of hard work have paid off," said Polydor product manager Hannah Flaherty. "Becky’s catalogue of undeniable hits has really cemented her reputation as one of Britain’s most influential artists in the world of dance. We have always known she is a trailblazer in the dance community, but it has been a special moment seeing her being recognised by the nation."

Hill's profile was further enhanced over the summer with her headlining the UEFA Women's Euro 2022 Final Show at Wembley Stadium prior to the Lionesses' historic victory over Germany, as well as her special performance on ITV dating show Love Island.

The 28-year-old's long-term manager Alex Martin of AM Music opened up on the international plans for the singer.

"First of all we have a small US tour lined up for September; San Francisco, LA, Las Vegas and two New York shows that have sold out," said Martin. "That shows us that there’s a real appetite for us finally to get over to the US, but we’ll be following that up with a tour in 2023 as well.

"We’re very excited about really putting a footprint on that particular market, finally. We know that there’s a great audience for her there; there’s clearly demand. We're working with a great American label, Astralwerks, and I'm very happy to be working with them. Also, CAA, our booking agents over there, are fully supportive of her, having seen the amazing success she’s having domestically.

"In Europe, Becky has put in a real shift this year with a lot of the festival market, especially in Scandinavia and Eastern Europe, to make sure we set up for bigger 2023 as well. We’re climbing the ladder on bills over there and there’s great demand for her."

We want her to be in that top 1% of artists in the world. We want Becky to be a globally recognised artist

Hill, who was the third most streamed UK female artist on Spotify last year behind only Adele and Dua Lipa, launched her maiden Ibiza Rocks residency in July.

"We’re looking to bring that back for next year," revealed Martin. "She has a club night called You, Me, Us, where she curates the bill and she headlines, and we’re looking to make sure that that is a long term residency. That’s why this year has been so important to make sure we get the footprint in Ibiza, and again I think that is emblematic really of what a trailblazer she’s becoming.

"You check your ambitions at every step, but that doesn’t necessarily mean that the overall plan is different because it’s always been for people to hear Becky’s incredible writing ability, her incredible vocals and her incredible performance. We’ve worked hard to make sure that that is always moving up and up, and I’m glad to say that it always has done.

To wrap up, in a rapid-fire Q&A, Polydor's Mortimer delves deeper into the lasting success of the Only Honest On The Weekend campaign, and where it goes from here...

It's five years since Becky signed with Polydor and even longer since she first started out in the business, how would you sum up her journey so far?

"It's been a long journey when you go back to her originally breaking through on records like [2013 hit with Wilkinson]. It's quite easy to overlook how well she's doing at the moment, so it felt important to highlight it."

What first made you want to work with her?

"Well, it was a couple of things. You knew she had a vocal that could carry a hit because she'd done it a couple of times already, and I loved the fact that she had a real understanding of dance culture and lived it. That's something that appealed to me because I came through that as well slightly, working for Mixmag, so a lot of our references were the same. When Richard [O'Donovan, A&R director] and I went to meet her for the first time, she sat us down and told us exactly what she didn't want from us. She was so straight-talking and I thought, 'I just love her and I want to work with her.'"

In short, what was the strategy for the Only Honest On The Weekend campaign?

"She always wanted to have a strong dance music influence, she wanted to lean into pop music in places, and she wanted to show that she's a real artist and not just a featured artist, if you see what I mean. So the strategy was to show how good she is as an artist in her own right, leaning into her influences of great dance music and pop. The fact she'd had so many hits already was great; it gives you a base to grow from and confidence that you're on the right track."

Why do you think the record's had such impressive staying power?

"She just keeps putting out great songs and clever collaborations, like the ones with David Guetta or the current one with Joe Corry. They're all killer records. It's amazing artist development. and it's something we're really proud of as a label. Artists like Becky and Sam Fender are what it's all about really: real artists with vision, making great music that sticks with people."

In our interview with Becky last year, it was noted that while her songs were well-known to the masses, her name wasn't. To what extent do you feel that's changed in the past 12 months?

"I think it's massively changed. She's done some really high profile things like her appearance on Love Island. She played before the Euro final and she's won a BRIT Award, which really cut through. It put her in front of people and made them realise there's a person behind all these songs they know. She had a 20-something crowd but we're going older and younger at the moment; it's really spreading out. She's a phenomenal songwriter: yes, she collaborates with people, but she's written all of these hits herself. And she's such a hard worker - she's really going for it this summer. Another part of the reason more people are connecting is they're realising what an amazing person she is. The thing with Becky is that she's a very real person - whatever she's feeling in the moment, you'll know about it - and that kind of realness chimes with the British public."

Lastly, what are the plans from here?

"She's wrapping up this incredible summer for her and then she'll be heading into the studio from September onwards. We'll be getting into it pretty quickly next year and she's just going to keep going. I think we're going to start achieving more international success. We're already seeing it actually - Remember is having a real moment right now in Australia, a year after release - and I think she is just going to grow and grow. She's got a great label in the US with Astralwerks, and they seem very focused on her as well. And Alex Martin, her manager, is a brilliant partner to to work with. He's incredibly ambitious, as is Becky. I hate to use this cliché, but the sky's the limit."