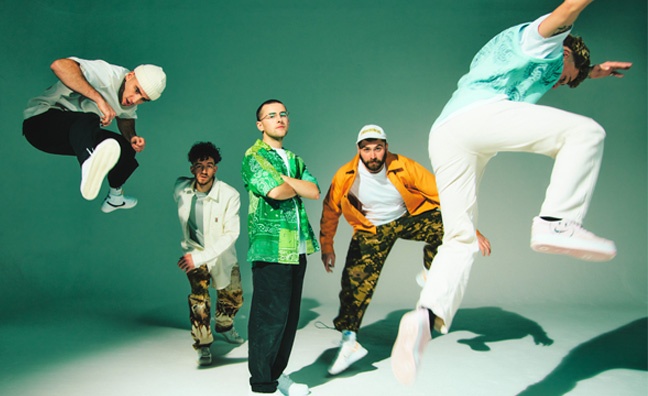 The Leicester collective are on course to go straight in at No.2 in today's albums chart with their debut LP Life's A Beach, which has sold 13,212 copies to date, according to the latest Official Charts Company midweeks.

The band, who were shortlisted for the BBC Sound Of 2020 poll, previously peaked at No.7 last year with their mixtape Junk Food (20,369 sales), and Bloom said he was convinced by the musically eclectic five-piece's superstar potential.

“What we’ve got with this band is die-hard fans and the songs to cross over to the mainstream,” said Bloom, speaking in the latest edition of Music Week. “I see them as future festival headliners, I have no doubt in my mind about that. They’re incredibly gifted. From the moment they signed, everyone realised what a great band they were.

“They are completely original. It’s soul, R&B, indie, hip-hop. It’s got this collective feel to it that is unlike anything else happening. There’s no set route for an act like this because there’s never been an act like this before.”

Bloom said the secret for bands to survive in 2021 was to be brave and push boundaries.

"They’re not in one lane, they’re in a multitude of lanes," he said. "It’s about building a real fanbase and having an artist or an act that works across all platforms, all disciplines. You’ve got to have a 360-degree campaign.

"To really cut through, you’ve got to win in all areas and this band can appeal to fans of multiple genres. That’s the world we’re living in at the moment, there’s no set tribes. What the UK has traditionally done well is cross-genre stuff. This is why it’s likely going to be massive. Merch and D2C have also been a massive part of the strategy to engage the fans."

At a time when there seems to be a ceiling on what bands can accomplish commercially next to solo acts, Bloom suggested frontman Murray Matravers holds the key to Easy Life breaking big.

“It’s an interesting debate, isn’t it? I think there’s a conversation on socials that [makes being a solo artist] easier. There’s just one person having a conversation,” he said. “But I think in Murray, as a leader, as a lead singer, we have that personality. For me, Murray is the conscience, he’s the poet, so it’s getting him across.”