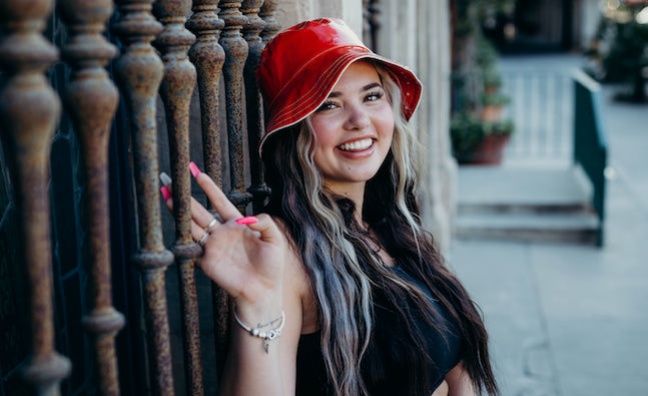 TikTok star Lauren Spencer-Smith has scored a Top 5 hit with a self-released single in partnership with digital distributor Tunecore.

Fingers Crossed has climbed to No.4 on the UK singles chart with weekly sales of 29,467, according to the Official Charts Company. It was streamed 3,126,225 times last week.

Lauren Spencer-Smith’s break-up ballad moved from No.90 with chart sales up 540.6% week-on-week. The independently-released single has total sales of 34,067. It is also No.1 on the OCC's official independent singles chart.

Fingers Crossed has been added to 48 Spotify playlists and is No.1 in four countries on Spotify.

The UK-born 18-year-old singer released a snippet of Fingers Crossed last November on TikTok - that video now has over 23.6 million views. Spencer-Smith then released the song directly into TikTok’s library through TuneCore’s Social Platforms service and the sound has been used over 18,600 times.

Lauren Spencer-Smith has 2.8 million followers on TikTok and over four million monthly listeners on Spotify.

Andreea Gleeson, CEO, TuneCore, said: “Lauren Spencer-Smith’s rocket-like trajectory is an example of what can happen when artists use social media to their advantage. If the song is good, fans will find it and push it to the top, which is what happened with Fingers Crossed. We celebrate Lauren’s incredible achievement, her beautiful song and hope that TuneCore creators find inspiration in seeing how it’s done.”

Born in Portsmouth, and now living in Vancouver Island, Canada, Lauren Spencer-Smith originally came to prominence as a contestant on the 18th season of American Idol, when she was 16 years old.

According to research from MIDiA, the DIY artist sector grew 34% in 2020 compared to 7% growth for the overall music market.