Overnight news from around the world: Thursday, May 26 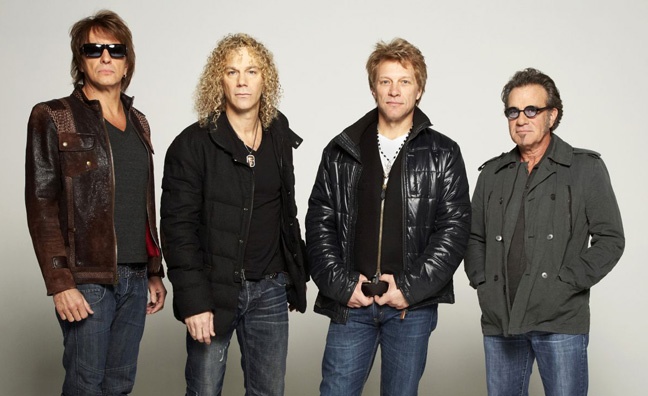 Bon Jovi will release their new album This House Is Not For Sale, in partnership with Island/Universal Music Group. The record will mark the band’s return to UMG following the conclusion of their contract with Mercury Records. (Billboard)

The electronic music industry grew 3.5% year-on-year to $7.1 billion, a slower increase than in previous years, although in line with general trends across the overall music business. The findings were reported by the International Music Summit in its global business report for 2016.

The government's independent review into the resale sector by Professor Mike Waterson is expected to be published today. The University Of Warwick-based economist received more than 1,000 submissions from promoters, managers, agents, artists and secondary ticketing platforms towards the report.

Warner Music France have announced an exclusive partnership with Julien Creuzard to create Elektra France. Creuzard was formerly head of Capitol Music France and more recently Polydor, both part of Universal Music France. He will head the new label, which will aim to attract and produce exceptional musical talent. “I am very proud of this new relationship with Julien, and I’m looking forward to much success in our venture together," said Thierry Chassagne, head of Warner Music France, said: "This exclusive partnership to form Elektra France is great news for our industry and our company. Elektra France will benefit from Julien’s enormous expertise in the discovery and development of new talent."

The European Union Intellectual Property Office (EUIPO) has claimed that the EU music industry loses €170 million (£129m) per annum due to music piracy, based on figures from 2014. In a report titled The Economic Cost of IPR Infringement in the Recorded Music Industry, it breaks down the €170m figure into €57m (£43m) of lost physical sales and €113m (£86m) in lost digital sales. (Music Ally)

An anonymous artist with more than 32,000 streams on Apple Music across 42 countries has revealed what they have been paid by the service per stream. The UK rate was $0.01070. (Digital Music News)

Australian festival promoter and SFX subsidiary SFX Totem (Totem OneLove Group) has gone into administration. The news follows the recent cancellation of both the 2016 Stereosonic festival and Armin Van Buuren’s Australian tour, originally scheduled for next month. (The Music)

Media tech firm Dubset Media Holdings has reached an agreement with Spotify that will dramatically expand the global footprint of its MixBANK distribution platform. The deal makes it possible for DJs all over the world to upload and legally stream their original long-form mixes and single track remixes, creating a brand new revenue stream for the artists whose recordings are sampled and the DJs who create the mixes and remixes. The new agreement is also expected to enable Spotify listeners to stream radio shows and other user generated mixes that have not been previously legally available to music fans.

Nearly five billion tracks have been streamed by more than 40 million listeners via Spotify's Discover Weekly feature since its launch in July 2015, the company has revealed.

Snooker legend Steve Davis is to play a DJ set at this year's Glastonbury. The six-time world champion, who also presents a show on an Essex radio station, will perform in the Stonebridge Bar. (BBC)