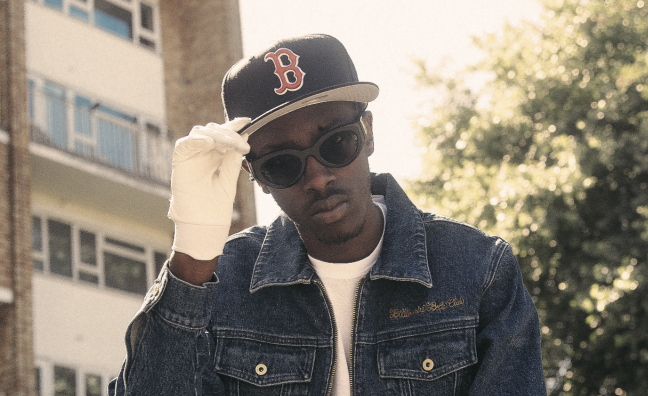 Unknown T has outlined his mission to be a force for good in UK rap and has told Music Week that his rise has accelerated the commercial acceptance of drill.

Speaking in our new issue, out now, Unknown T (real name Daniel Lena) said that “there’s a light at the end of the tunnel for drill,” adding that he’s here to “enlighten people”.

Unknown T was signed to Island Records after independently releasing a series of hyped tracks including Homerton B, which became the first drill single to go silver in the UK. It now has 384,997 sales. The MC has more than 1.5 million monthly listeners on Spotify.

As his career accelerated, the rapper was jailed on a murder charge that he was subsequently cleared of. He maintained his innocence throughout an eight-month sentence. In an intimate interview, which subscribers can read in full here, Unknown T opened up about his musical vision, his time in prison and his keenness to forge a brighter future for Britain’s youth.

“Drill is now in an upwards spiral, drill is the new bitcoin,” he said. “Homerton B was my confirmation, it was the game-changer in the industry, let’s be real, after that, everybody started appreciating drill and commercially accepting it. Prior to that, everybody wanted to ban it, but we can never forget history. I was the man that broke that chain.”

Drill is now in an upwards spiral, drill is the new bitcoin

“He is among the most unique voices in UK rap and hip-hop culture,” White added. “He’s a pioneer of the new generation and the campaign is in full swing. He’s here to stay.”

The East London rapper, who is managed by Fawaz Thompson and Papa ‘Papes’ Addai of Stay Solid Music, told Music Week he hopes to ensure drill can become a positive force in UK culture.

“I’ve always been a person of my own mind, I don’t find it difficult to argue,” he said. “A lot of people feel like we should ban drill, but I have really thought about the depth, forensically, of the argument, and instead of stereotyping and putting all the blame on drill artists, we need to break it down and think about where this roots to, and it actually roots to the government.

“We wouldn’t be living this lifestyle and rapping this way if we were dealt with correctly by the Conservatives, if there was investment into youth and activities. We’re just left in this shithole and this is our only way out. That’s the side of the argument I’m on and I can naturally express this to people because I’ve had time to really think, especially because of what I’ve been through. The passion is imprinted within me.”

He said Rise Above Hate – which counts AJ Tracey, M Huncho and Young T & Bugsey among its features – can be a blueprint for expanding the boundaries of drill.

“The tape is not the usual type of drilly sound you’d hear from me, this is the first time I’ve actually stepped out of my comfort zone and I want to encourage other people to do so,” he said. “I feel like a lot of artists have a lot of pressure to make per-fection and we don’t get that chance.”

Reflecting on his stint in prison, which he called "the worst time of my life", Unknown T said he was shocked at what he experienced.

“I was really shocked with opening my eyes to the injustice and the way the system treats black youths behind closed doors,” he explained. “It did bring a lot of anger to me and it made me upset, all these things I used to see as a little boy were true. The system does really target you when you’re a black boy and you’re doing well. These are things we can’t ignore, the injustice that goes on within the criminal system. They make an example of you, it’s true.”

Subscribers can read the full interview here. Our 2018 report on drill is available here. Look out for more on Unknown T on musicweek.com soon.

To subscribe and never miss a music biz story, click here. To order your print edition, email Rachael Hampton on rachael.hampton@futurenet.com. Make sure you can access vital music biz information wherever you are by signing up for our digital edition here.