Keith Richards to take over BBC Four for an entire weekend 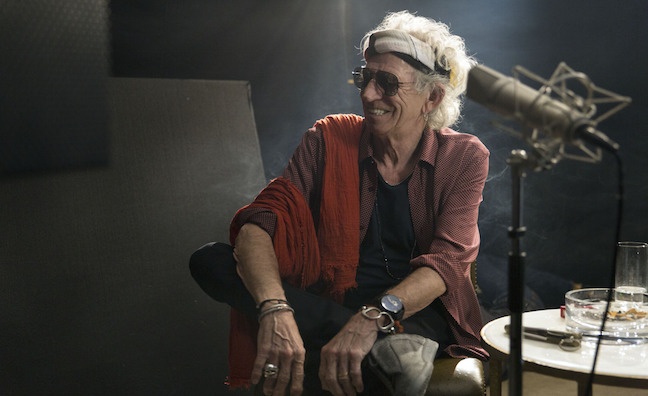 BBC Four has invited The Rolling Stones' Keith Richards to curate an entire weekend of programming on the channel later this month.

Richards will hand-pick all the shows and will feature between them across each night in a specially-filmed in-depth interview.

The schedule will feature some of his favourite movies, such as Alfred Hitchcock’s The 39 Steps and The Man Who Would Be King starring Sean Connery and Michael Caine, as well as never seen before Rolling Stones archive footage and archive footage of Johnny Cash and Jimi Hendrix with Keith.

Filmed and compiled by acclaimed director, Julien Temple, the weekend's schedule will also feature Temple’s new 75 minutes long Director’s Cut of Keith Richards - The Origin of the Species which  was broadcast on BBC Two in July.

Keith Richards said: “No one has taken over a TV channel before. Let's see how it flies!"

Julien Temple added: “The programming will be interwoven with a uniquely relaxed, wide-ranging and intimate interview in which Keith shares his legacy, world views, life philosophy and survival strategies with viewers. It’s an open invitation for the audience to get to know Keith in-depth over three nights in a way that has never been seen before. As dawn breaks, those viewers who have experienced the full ride can celebrate the fact that they have been able to make it all the way and out the other side with Keith Richards as the sun comes up on their TV screens.”

Cassian Harrison, editor, BBC Four, said: “BBC Four has always been the home of singular, eclectic and passionate voices - and who would qualify more for that moniker than the legendary Mr Richards. I’m delighted (if also a little nervous) to be entrusting the channel to Keith and to journeying with him through the night, enabling viewers to spend a weekend on BBC Four with one of the most famous and intriguing people in the world in a way that transcends the bounds of a traditional channel.”